We didn't mean to go to sea!

After spending a wet and windy weekend in Gosport, Mark announced that we needed to go to Port Solent as there were jobs needed doing on Offbeat and there was a marine superstore on site.

Oh dear, this was going to be expensive!

As the wind was still against us, we had to motor sail up the river to the marina.  Relatively uneventful journey except for going past the newly launched largest aircraft carrier in the fleet.  It was pretty impressive and was guarded by two police boats which got very twitchy when anyone went to close to them.

It was a very pretty marina and they just so happened to be celebrating their 30th birthday, so lots of flowers and bunting around the marina. The marine superstore was a 5 minute walk away from the boat so Mark was happy and I was happy as there was an abundance of cafes, restaurants and shops.

We even managed a date night, at the same place as the monthly Ferrari meeting.  It made for great people watching, especially at the end of the evening when the cars had to reverse out, there were some nervous glances exchanged by owners! 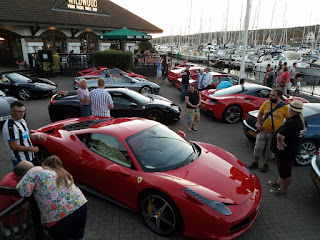 We ended up staying 5 nights, but there’s only so much Chandlery and shopping you can do (especially when you’re limited for space), so on Saturday 4th August we set of to Yarmouth on the Isle of White where we were going to stay overnight and head off to Dartmouth on Sunday.

It was a beautiful glorious day and we could see for miles. Unfortunately though there was no wind so we were under engine.

Coming out of Portsmouth, we turned right and headed towards The Solent.  After poodling along for about an hour, I saw something unusual on the horizon.  I couldn't quite make it out so got the binoculars out. To my utter horror I saw an horizon full of sails, thousands. It was only the start of Cowes week and we hadn’t realised it! Oh my was this going to make for interesting sailing.

I have to say, that I was rather disappointed when we arrived at Cowes and found that most of the yachts were halfway up river Itchen heading towards Southampton. Still, we got to see Cowes at her finest and managed to dodge the yachts still racing in The Solent. And no, we weren’t going to be able to stay in Yarmouth either. 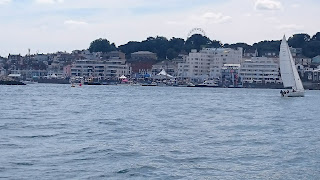 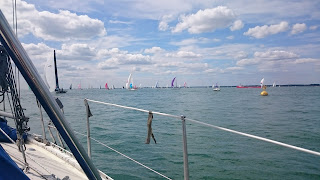 So, what was plan B?

Whether it was a mixture of sun or exhilaration at being back on the water and moving, we came up with the idea of going straight to Dartmouth. Mark was on the helm, so I was charged with passage planning. Given that there was still no wind and very light winds forecast, we would have to motor most of the way, but should arrive at Dartmouth around 10am the next day.

So, minds madevupbwe steered a course direct to Dartmouth.

Sailing past The Needles was quite a sight to behold, given that they are such an iconic landmark, we felt as if we were truly heading west now.


Our first night sail together without any other crew was just magical. The sunset was stunning, the sea was calm and when the moon came out to keep me company in the early hours of the morning I felt at peace with the world. 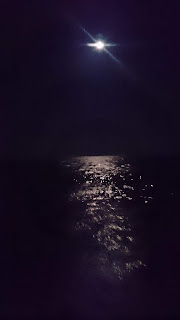 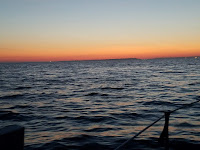 I desperately wanted to see the sunrise, but after 4 hours on the helm I was done in so it was with reluctance I went below and slept.

When I awoke a few hours later, the sun was up and the views were stunning.  We had moved inland and we could see the Devonshire coastline. Even Simon the cat was happy! 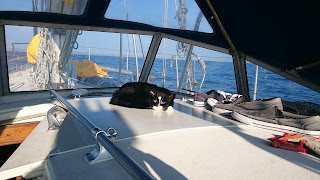 Entering the river Dart was absolutely breath taking.  Having come from Suffolk we are used to pretty views, but these were something else. 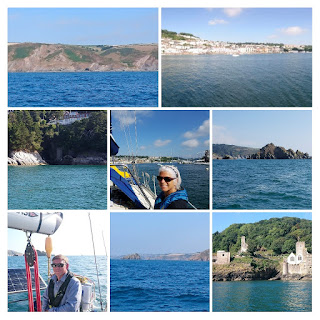 Seeing all the little coves and houses set into the cliffs, together with the castle with a church as a backdrop are scenes that neither Mark or I will forget.

We headed further up the river, past the town of Dartmouth and the grand structure of the Royal Naval College towards our final destination of Noss on Dart where we planned to spend the night. 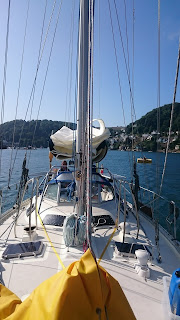 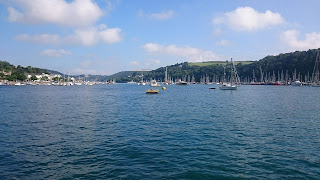