Sunday 21 June 2020 we entered the realms of the new norm.  Spain was no longer under a 'State of Alarm' and regional Government's took back control of their regions.  Unless there was another major outbreak of CV19, all decisions relating to the management of the virus and the economy would be made at regional level.
Life in Estepona has gradually returned to some resemblance of normality.  We've seen friends return to work who had been shielding, we've seen restaurants and bars reopen and in the marina, we have seen more movement of boats both coming and going.  People are still very cautious though and facemasks are mandatory. 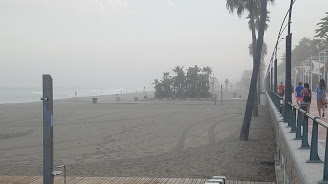 It was funny,  but during the first few days of the 'New Norm' we saw fog engulf the beach and the paseo.  It was as if the mysteries of the universe was forcing the town to take things slowly.  Of course though, once the mist and fog lifted the townsfolk came out, but the beach was still empty.
The Spanish quarantine requirements were lifted on the 20 June and there was a lot of anticipation that holiday tourists would come flooding back to Spain.  Whilst some towns along the Costa del Sol have seen increased tourism, there hasn't really been a huge increase in Estepona.  There are certainly more people in the town, but nowhere near packed to capacity.  A good benchmark for this is the Sunday market at the port.  Once renowned for its vibrant hustle and bustle, it is still eerily quiet.
Unfortunately for us our summer has taken a very different route to what we had planned in January and revised in May.  We have not left Estepona, other than to have a couple of day trips out.
Once we had entered the new norm and it looked as though there would be freedom of movement across Europe,  we changed the grandchildren's flight tickets to Malaga so that they could spend some time with us in Estepona. But, unfortunately the number of new cases of CV19 increased considerably and at the end of July the British Government recommended only essential travel to Spain and those returning from Spain would have to quarantine for two weeks.  We made the tough decision not to risk it with the little ones, so cancelled their holiday. I think it's safe to say we were all pretty heartbroken,  but hopefully we will see them soon. 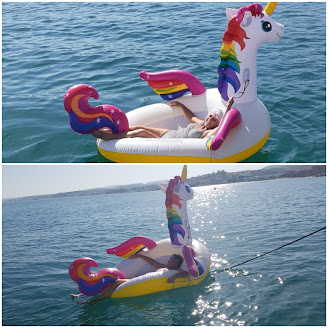 It hasn't been all doom and gloom though, we had a lovely long weekend in the mountains and visited family in Tolox (more on that in a separate blog).  We've been out to sea with our friends Richard and Edita and Isaac and his family where we got to test out our inflatable unicorn, which was my Christmas present from Mark's sister Jo.  This turned out to be great fun and despite Mark constantly complaining about it, he seemed to enjoy it the most, especially when he realised he could fall asleep on it!
Being in Estepona over summer meant that we were here for the celebration of Virgin del Carmen, which is a big thing in Estepona as she is the Patron Saint of fishermen.  Usually there is a big parade of the Virgin del Carmen statue through the streets, with bands playing and singing.
She is then taken to the waters edge and launched on a raft and taken out to sea surrounded by all the local fishing boats and anyone else feeling brave enough to risk it. This part is usually at sunset, by which time a lot of alcohol has been consumed on the fishing boats! Things then get really crazy. If you want to onow how crazy watch the short documentary The Passion of Andalucia. The scenes of the Virgin and the guys in the sea were shot in Estepona.
This year because all holy saint day celebrations and fiestas have been cancelled, it was a lot more sedate and involved just dignatories and the local priest on a fishing boat.  It was still enjoyable and there were about 15 boats that went out to sea, trimmed with bunting and flags, blowing horns and shouting their praise to the Virgin del Carmen when the blessing was given.  Although nowhere near as grand or crazy as previous years, it was really enjoyable and gave us a very small glimpse of what it would be like.

Diary of a live aboard during lockdown - CV Week 14

After working so hard over the last few weeks   we had a relatively lazy week, which involved doing some odd jobs but most importantly,  having some downtime.


We treated ourselves to a night out at a beach bar on Playa del Cristo.  It's a perfect place to go and chill, with good food, wine and service and is a beautiful romantic setting when the sun goes down.

Our other highlight of the week was being treated to a day out by a fellow sailor from our pontoon. Peter is a retired gentleman who has a yacht moored on our pontoon and who one day, had the misfortune to fall off his boat. I saw him fall and rushed to help him, but I couldn't do anything but push the boat off the pontoon to stop it crushing him and shout for help.  Luckily two Spanish guys heard me and came to help and along with Mark were able to lift him onto the pontoon. 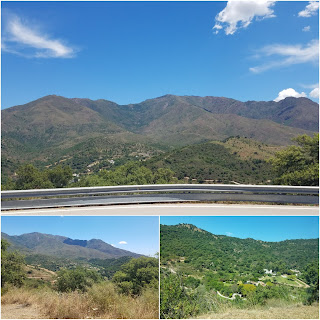 So, by way of a thank you to me and to Mark who had helped him with some work on his boat, he drove us up into the beautiful mountain side of Casares, which is a picture postcard white village with a population of around three thousand and a view to die for. To say it is stunningly beautiful would be an understatement. The village is a tourists heaven, with white washed houses, the remains of an Arab castle and a church perched at the highest point of the village.
What makes it even more enchanting though is that despite its beauty and stunning views, it isn't part of the coach tour carousel found in some of the other pretty white villages of Andalucia.

A real gem, but shush, don't tell anyone else!


Back in Estepona, the news and chatter was all about ending the State of Alarm and getting ready for the 'new norm'.  It would mean that from Sunday 21st June restaurants, bars, shops etc. could return to there normal capacities, albeit with strict social distancing and sanitary requirements and facemasks would still be required in shops and places where social distancing wasn't possible.

For us it would be no more restrictions of movement across the country and we would be free to travel anywhere within Spanish waters.  It would also mean that and tourists could start arriving and the quiet tranquil life we had led for the past three months would all change.  Only time will tell if it will be for better or worse!