Noss on Dart was so beautiful we ended up staying a couple of days, with a promise to each other that we would spend a bit of time catching our breath before Plymouth and the big departure.

It just so happened that our pretty little marina was set in the midst of woods and through those woods came the Dart Steam train, blowing it's horn as it came round the corners.  We could see the steam through the trees and hear the horn from where we were moored, so we decided to go and explore.

Off we headed along the footpath into the woods where a local farmer had put up a sign saying ‘Beware Basking Adders’. We weren’t sure whether it was a sign intended to put people off walking through the woods or whether it was for real. Either way, we weren't taking any risks so letting Mark go first for a change, we proceeded with caution!


Walking through the woods, we managed to find a lovely spot to watch the train come through, although it did involve going off the beaten track and clambering through undergrowth (we'd forgotten about the adders by now!), clinging onto trees for dear life so you didn’t slip down the bank onto the track. 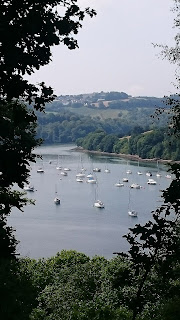 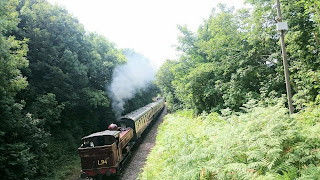 The clamber, scratches from thistle and slippery slide was worth both the view of our moorings and the view of the train coming through, with steam chugging and whistle blowing.  The grandchildren would love it.


With footage captured and feeling rather pleased with ourselves we clambered back up the bank. Hmm, have to say, going down was easier!

Back at Offbeat we had a restful day, just pottering around as neither of us could ignore the list of jobs that still needed to be done to make Offbeat ready for the Biscay crossing.

Just as we were going to settle down for dinner, there was a bit of commotion on the Pontoon.  Being nosey I went on deck to see what was going on. The local seal had turned up and staked her claim to the landing edge by the side of the Pontoon, which in itself was a sight to behold.   People were scurrying to get their cameras to take photos, but they needn't have rushed, she was there to stay. 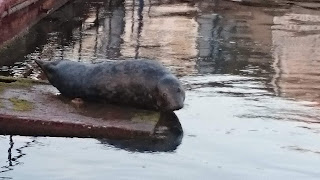 Like a seasoned celebrity, Lady Seal turned from side to side whilst having photos taken.  This lasted a few minutes and then she got bored and started hissing at us. I can only imagine what she was saying in seal language! So, after being duly dismissed everybody dispersed and went their separate ways.

Next morning we were up with the birds and heading off to Plymouth, so with a twinge of regret at not being able to stay longer, we headed down the river Dart and back into the English Channel.