British summer at its best!

After spending a very pleasant evening out in Brighton, we had a leisurely start on Friday morning. We had a lie in until 8am!

We both love Brighton and wished we could have stayed longer, but we are keen to get to Falmouth as soon as possible, so sacrificed a weekend of fun in Brighton!

We left Brighton en route to Portsmouth at around 10am. We new that we would be motor sailing all the way to Portsmouth as the winds were blowing in from the west and we were heading west.

The weather was fair and forecast was good, so we settled down for another dull day of motor sailing.

Mark spent the morning below busying with man stuff and I was on watch, playing spot the next crab pot.

Nothing much to report when Mark came on deck at around 12ish, just how many crab pots I'd spotted.

As we were quite away off land, there wasn't any scenery or people watching to be had, so I went below and made lunch.  However, I had noticed clouds starting to form in the distance and pointed them out to Mark. My instincts were telling me something was brewing and it wasn't just the tea. 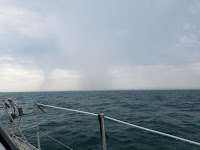 By about 2.30pm, the clouds had really formed and were getting darker. I said to Mark I thought we should get our oil skins on as I had a feeling that things were going to get interesting. 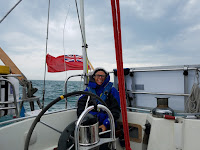 By the time we had put our oil skins on, the first thunder storm had taken hold, the rain was lashing down, the wind had whipped up and the sea was getting angry.


There were a couple of times when visibility was really poor and we listened on the radio to people notifying the coastguard that they were in the Looe Channel (which is narrow, shallow and with rocks either side) and that they may need assistance.  Luckily they didn't.

The squalls lasted a couple of hours and made for interesting sailing, certainly different than the previous couple of days of windlass calm seas.

Entering Portsmouth harbour on a Friday afternoon at about 5pm was like being in a parallel universe. On one side was a fort flying a pirate flag, on the other side was a fort with a wedding taking place.  Mix this with ferries crossing the channels with car alarms going off, hovercrafts flying past and hitching up on the beach and cloud formation that looked like something from a sci-fi movie, I was glad when we motored into Haslar Marina, turned the engine off and had a very large glass of wine!

Watch out for flying Hovercraft 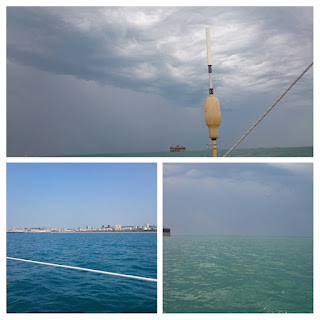 British Summer at its best