I know, I know, I’ve been very tardy keeping the blog up to date, but it’s been a busy few weeks.

After arriving safely in Gosport on Friday 27th, we secured Offbeat into her berth in the marina and sorted the admin with the marina office.  The wind was picking up a bit so we put the cockpit tent up, opened the beer and wine and settled down for a quiet evening.

Ha,ha. Little did we know the next Pontoon was where the party boat left and arrived from. Sitting having a quiet drink in the cockpit, we were rudely interrupted by the party boat arriving back with some very merry people on board, including Saffron who was struggling to make it down the pontoon in platform shoes with 25 knots of wind knocking her sideways! Her friends found it highly amusing and I have to admit it was entertaining watching them all disembark from the boat, in shitty weather conditions and steaming drunk.  I was also slightly jealous of their party trip, it looked as though it had been a good one!

After a bit of a restless night because of the wind, we were up and about relatively early as the first of our visitors were arriving.

Mark went off to do some washing and when he returned he was very excited. “Guess who I’ve just bumped into?” he says, “who?” says I, “”Robin and Dave Tonge are on Carina, moored up a couple of pontoons down”. For those that don’t know, Mark and I used to belong to Adastral Park Sailing Club and Robin and Dave are members and old friends. Carina is the club yacht and they were en route back to Levington Marina and had stopped in Portsmouth for a crew changeover. As they were staying the weekend, we planned to catch up with them on Sunday but it goes to show, you never know who you’re going to bump into when you’re on an adventure.

Jo and Dave, our first official guests arrived at lunchtime and in true Parker tradition, the first thing we did was to head to Portsmouth for food and alcohol. A few hours later we left the restaurant and thought it would be a good idea to go up The Spinnaker.

It just so happens that I suffer from vertigo and Jo hates heights, so I don’t know if it was alcohol or bravado, but we walked across the glass floor of The Spinnaker which gives a bird’s eye view to the ground.  Looking back, I cant believe we did it, but I'm sure there will be plenty more times on this adventure that I will think that. 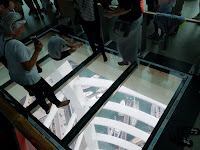 If you haven’t been to The Spinnaker, it is well worth a visit as the views are spectacular and we could see Offbeat in her mooring in Gosport.

We had a lovely afternoon in Portsmouth with Jo and Dave and headed back to Gosport early evening for more drinking and eating.


It was with a lump in my throat and a tear in my eye that we said goodbye at the end of the evening, but with a promise from them to visit ‘on the other side’ very soon.

Saturday night saw the strong winds arrive and whilst we had made Offbeat very secure, the constant pull on the lines was troublesome so early Sunday morning Mark got up and braved the elements to attach snubbers to the lines. It made life as comfortable as snuggling into your duvet in the middle of winter.

There is only one word to describe the weather on Sunday morning, Pants! Not only was it blowing a gale, it was pouring with rain too. 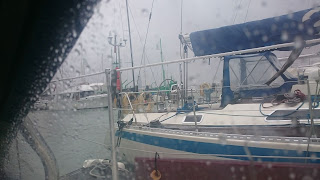 Hey ho, such is life living on a yacht, we had food to buy and a Chandlery to visit. The wind and rain was against us walking into town, but at least it blew us back to the marina with all our bags of shopping. 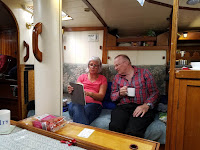 Sunday afternoon saw the second of our visitors that weekend when the lovely Robin came to visit for a cuppa. It was particularly special for Mark as he and Robin had spent many hours on Offbeat doing the refit and although we had said our goodbyes in Ipswich, it was quite fitting that we should bump into him at the start of our adventure and he would see Offbeat at her finest.

For me, I’d set myself the challenge of cooking a Sunday roast on Offbeat, her and my first one together. After a bit of thinking and planning, the dinner was cooked. Roast beef with all the trimmings followed by Apple crumble and custard. 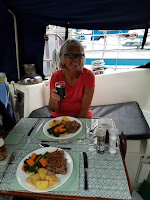 Bit of a success I think!