It was with excitement and anticipation that we set sail for Plymouth where we were meeting our crew for the first major crossing in our adventure.

Both Mark and I were thinking the same. Crikey, it was getting real now and in a couple of days time we would be setting sail for Spain.

Were we ready for such a journey? We still hadn't really put Offbeat through her paces as we'd had either no wind or very light winds on our journey so far. Mark was confident that she would be fine and as I trust his judgement, I was also confident in Offbeat.

The other aspect of our impending journey was whether we were mentally ready to make that final step and leave England for what will be a good few years? We knew that once we get Offbeat to Spain, the likelihood of her returning would be very slim.

Mark was more than mentally prepared, he'd been waiting most of his life to do this and was very excited by the prospect of sailing his boat across Biscay.  I on the other hand was quite apprehensive as I felt I was leaving behind everything dear to me  and I did go through a bout of homesickness, missing my family and especially my grandchildren. But, with the help of video calling I managed to get through it.

So, with all this going through our minds, we headed out of Dartmouth early on Tuesday morning so that we could catch the tides to whisk us to Plymouth.

We had to put the engine on for the first part of our journey as yet again there was very light winds. By lunchtime the winds had started to pick up, but they were coming from the west and we were heading west so we decided to tack across the bay to get at least a little bit of sailing in.

The journey was quite uneventful, except for my first ever sighting of dolphins swimming alongside Offbeat. It was a truly amazing sight and at that moment in time I felt very blessed to have such a great experience.  Little did I know that it would be the first of many!

We reached Plymouth at about 16:30.  We had already decided which marina we wanted to stay in, so I duly called them to book a berth. I was completely dumbfounded when they said that we could only stay one night as tomorrow and Thursday night were the British Firework Display championships.  I couldn't believe it; we'd yet again managed to rock up at a place with a major event and had no clue. As someone who doesn't do detail unless I have to, I think there's a lesson to be learnt here!

Anyway, they managed to find us a space and with a bit of smiling and charm with the staff in the marina office, we were able to stay until we set off for Biscay.  Kurru, our Gambian friend, once said to us "it's nice to be nice" and we live by this mantra and it nearly always pays off.

Our dear friend Mark Sanderson, who was crewing for us arrived not long after we did.  Mark P and Mark S (I know, it's going to get complicated!) had worked together over recent years and struck up a friendship through their mutual love of sailing.  Mark S has completed the Fastnet race so we knew he was suitably experienced for the Biscay crossing and we were both confident in his ability to help and support us on this leg of our journey.

After a few beers and a catch up, we headed into town for dinner.  We ended up in a curry house that was furnished like something out of a Bollywood movie.  Quite funny really, two rugged sailors in a garish restaurant with bright red and neon pink trimmings, but the food was good.

Wednesday was a busy day as there were last minute jobs to do on Offbeat: we had to finalise our plans for departure on Thursday and do a major food shop for the journey.  By this time, Mark had moved into Skipper mode and duly organised us and the jobs for the day. Luckily, I got the shopping job so had a bit of time in town although I have to say that Plymouth isn't renowned for its shopping!

Jobs all done, we regrouped back at Offbeat for more passage planning and supper. Weather was checked, the route was planned and plotted on the charts and programmed into our navigation tablet. With jobs for the day ticked off, we headed up to the marina for the firework display.

There's only one word to describe the firework displays WOW! In total there were 3 displays, each lasting about 15 minutes, but each one different.  Mark P captured a tiny bit on video so that we could share it with you.

It certainly was a night to remember and a great send off for Offbeat and her team.

D Day arrived and it was with excitement and apprehension that I set about the last jobs to be done before we headed off into the big wide world in the afternoon.  Mark was completely focused now on making sure that everything would be ready and ship shape before we slipped our mooring.  I have to say, he was a great leader and we we're starting to bond as a team.  I had a good feeling that I would be well looked after by the two Marks!

Final checks were made, safety equipment was secured on deck and in the cockpit and life jackets were put on.  We had one last job to do before we left, which was to fill up with diesel just in case there was no wind in Biscay (ha ha we said to each other, what are the chances of that!).

So, with diesel in our tanks we sleekly slipped our mooring lines at 15:15 precisely and headed out into the English Channel. 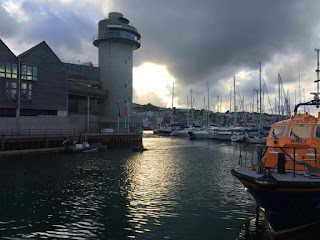 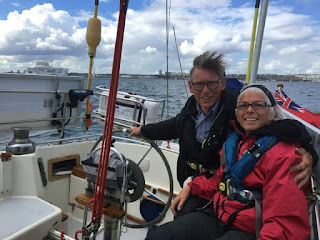 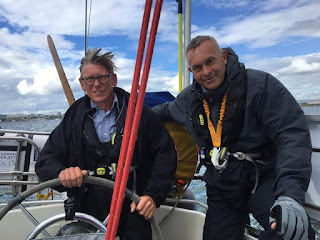