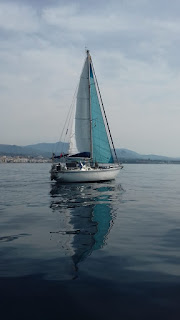 We slipped lines from Estepona marina at 09:40 and headed to the harbour entrance. At last, after 20 long months we were finally heading out for our Summer 2021 adventure.
Our friends Edita and Richard and Leslie and Peter joined us for a short part of the way.  In Richard's boat, they motored with us to the fish farm just outside Estepona. Then, with a blast of the horn and a display from the dolphins they headed back to Estepona whilst we continued to head towards Benalmadena for our first stopover. 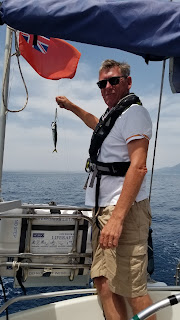 The journey took about 8 hours as the wind was intermittent and behind us at times.  The highlight of the journey was Mark catching a fish, but as it was quite small, he returned it back to the sea.

Up and out early and with our sails raised we headed to Motril where we planned to stay for a couple of nights. The weather forecast was favourable for rounding Cabo de Gata on Friday so it would give us time to do the necessary preparations and passage planning. We kind of like Motril. It's a small scruffy commercial port with one upmarket marina and one more downmarket marina that is run by friendly and helpful people that are as ordinary as us. Guess which marina we went to (for the second time), and always will return to. Mark got driven around the industrial estate by the manager of the boatyard looking for a 3€ plumbing part and some oil additive because the boatyard manager was concerned that Offbeat is consuming too much engine oil. They discussed diesel engines, families, tourism, the price of breakfasts and employment in the area. Mark's Spanish must be improving because this was all done in Spanish, and deep Andalucian Spanish at that. 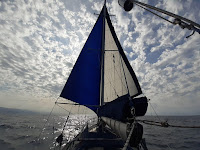 We slipped our lines at Motril at 08:30. The forecast was for the wind to be behind us all the way to Cabo de Gata so Mark had rigged both spinnaker poles for twin Yankee jibs; orejas de burro in Spanish ('donkey's ears') and goosewinged in English.  This made sailing with the wind behind us a lot safer than with one jib and the mainsail and its metal boom threatening to swing over rapidly in an jibe. Twin jibs also means that they could be reefed very quickly and safely if needed. Whilst I had been in England in May, Mark had spent a lot of time planning and designing this system. Now we would be putting it to the test.

We wanted to round the cape in daylight as it can be very challenging rounding it with strong winds and big waves.

We made good progress during the day, with an average speed of 6 knots.  By the time we approached Cabo de Gata we were ahead of schedule.  The wind was strong at Force 5 to 6 (20-25mph) and the sea was rough with 2 metre waves. Mark reefed to 2nd reef as he anticipated this weather for the next couple of hours. 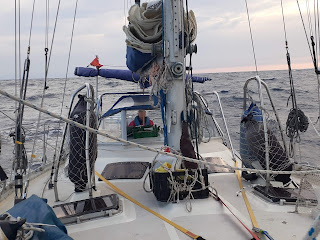 It was tough sailing on my part as it was mentally and physically challenging. Mark however, when he had his turn on the helm, was averaging between 6.5 and 7 knots, reaching a maximum of 7.9 knots. He was in his element and exhilarated by the way Offbeat handled with her 'donkey's ears'. All that time spent planning and designing was paying off. 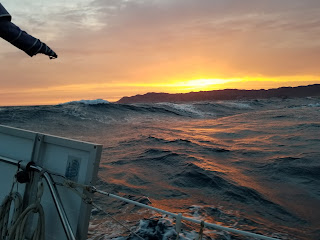 As we rounded Cabo de Gata we were treated to the most spectacular sunset over the hills of that ruggedly beautiful national park. As we turned north in the increasing darkness Mark reset the sails and our course. As we had made good progress,  we headed for the city of Cartagena with an estimated time of arrival of 12:30 the following day.

Once we had passed the industrial port of Carboneras where there is always the possibility of ship movement, we settled into our routine for the night sail, taking it in turn to do 2 hour shifts at the helm.

By 05:30 the wind had changed course and was now coming from the North and decreasing.  This was not as forecast! It was slowing Offbeat considerably,  by 1 to 1.5 knots so our average speed had fallen to 4.8 knots.  Our ETA to Cartagena was now nearer 16:00. Time for the engine and a rethink.

Exhilarated from our achievements but exhausted from the challenging sailing conditions we made the decision to head into the little port of Aguilas rather than pushing on to Cartagena. We tied our lines at 08:40, 24 hours after leaving Motril. We both experienced a fairly extreme attack of 'sea legs' where you feel wobbly on solid land after being at sea. 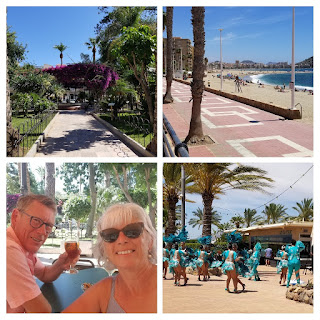 We stayed in Aguilas for a couple of nights, to catch our breath and relax before heading to Cartagena. Aguilas is a pretty little seaside town, with a beautiful coastline and beach, a quaint little plaza in the middle of the town, where we enjoyed a couple of slow drinks and tapas, and an impressive castle set at the top of a hill overlooking the harbour.

Feeling rested and relaxed we headed for Cartagena. For the most part we sailed the short distance with the jib and mainsail, but there were a couple of hours where we had to put the engine on.

Approaching the coastline towards Cartagena we were taken aback by the waves bouncing back from the high cliffs 2 miles away. At times they were 1.5 to 2 metres high and rolling us around horribly. We decided not to explore too close!

We arrived in Cartagena early evening to be greeted by Spanish and French warships moored at the end of our pontoon. We had heard on the VHF that there were NATO exercises taking place in the area and guess that these ships were part of that exercise. 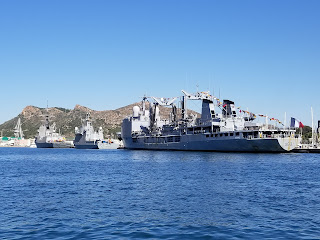 Next morning as we were leaving the harbour, all the dignitaries were on board one of the Spanish ships called, simply enough, Flagship. An admiral gave a speech. There was a lot of bunting.  It was really nice of them to see us off on the next stage of our journey.

Under full sail - mainsail, staysail and yankee - we headed to the Mar Menor, a large inlet of salt water reached through a narrow channel with a lifting bridge.  En route we saw a fishing boat being towed by the Salvamiento Maritimo (the Spanish lifeboat service except its a government service unlike the British RNLI) and then a fishing boat towing a large fish farm structure very, very slowly. This was new to us, we'd never seen it before, but thinking about it, how else do they get into position? There are lots of these fish cages along the Spanish coast for storing tuna and other fish alive until its time to land them or growing mussels. 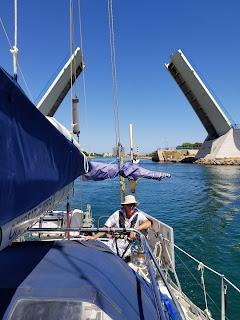 We entered Mar Menor just as the bridge was being raised. It is quite a spectacular sight, seeing the bridge raise and sailing through it.

An hour later we were anchored in our favourite Mar Menor anchorage off San Javier, close to the Spanish airbase. We planned to stay here until we had favourable winds to take us on our way to the Balearics.

Ah, the peace and tranquility of Mar Menor was something we were really looking forward to. Ha, ha! 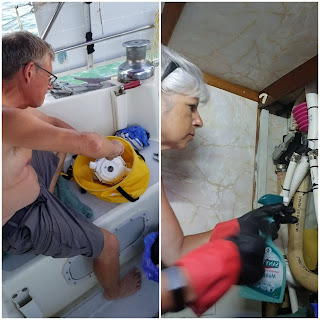 First full day in Mar Menor and the toilet leaked when it was flushed. Obviously a job that can't be left, we spent the morning sorting it out. Mark cleaned the component parts and replaced seals whilst I cleaned the pipework and area of the leak.  By lunchtime it was as good as new, so we could relax for the afternoon.

I had just settled into the cockpit to catch up on admin when I heard the roar of jets.

Looking out from under the sunshade, I was treated to a fantastic air display by the Patrulla Aguila- Eagle Patrol - Spains equivalent of the Red Arrows.  I don't know if they were practicing or if it was part of a dignitary visit, but it was spectacular and provided great entertainment. 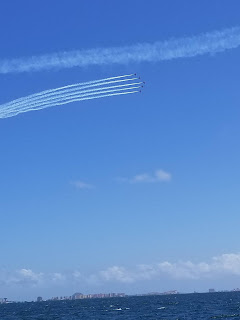 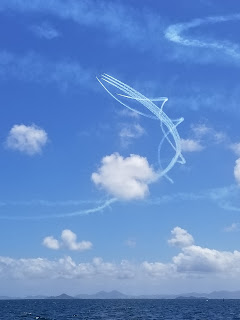 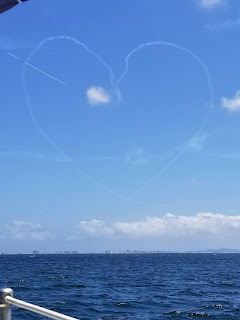 After that display, the rest of our stay in Mar Menor was relatively uneventful. Oh, except for the man who, while passing by us, fell off the back of his boat while having a pee. His boat was drifting dangerously close to a group of moored boats with the woman on board unable to use the engine. We jumped into action to help, but he was rescued by some marineros from the nearby sailing club.

By Friday it was getting clearer that Sunday would be our departure date for heading to Ibiza.

At midday Saturday we departed Mar Menor and headed to the marina at San Pedro where we would stay the before leaving early the next day. Coming in to Mar Menor had been such a tranquil journey, just us and a few other boats sedately cruising in. Leaving Mar Menor was not quite the same. We had not anticipated the mid-day rush on a Saturday and it was mayhem! 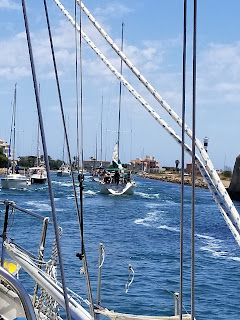 At 11:00 we slipped our lines at Marina Salinas in San Pedro. At the harbour mouth Mark set up the spinnaker poles and lines for 'donkey's ears' as the forecast was wind behind us all the way.

As with most things in life, you can never be 100% certain. All the weather apps had forecast southerly winds but once we headed out to sea, the wind was more east of south so Mark changed the sails for broad reach sailing.

The wind gradually increased and by lunchtime we were often reaching over 6.5 knots.  This was a good thing as it meant we would cross the shipping lanes in daylight.

By mid afternoon the wind had shifted which meant that we couldn't make our planned crossing point so Mark set a course to cross it earlier. Sailing any reasonable distance means constantly adapting to changing weather, 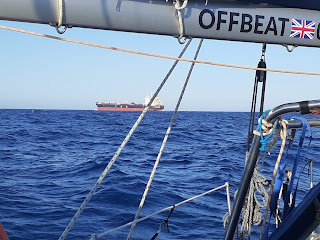 We crossed the shipping lane south of Alicante. There were two ships of note: one, a lorry ferry heading south changed course to accommodate us and pass behind our stern and a North bound tanker that Mark called and we changed course to go behind his stern.

The one regret that we had was that we missed crossing the meridian line. It's quite a thing to watch the compass reading change from west to east, but there will be other times!

Once across the shipping lane, we set a course for Ibiza. We had supper together, reflected on the journey so far and then settled into our routine for night sailing.

We made good progress and as night fell, the low cloud that had clung to the shoreline of mainland Spain started to disappear.

At midnight there was no moon out yet, so the sky was black and filled with stars and the milky way cut a creamy swathe above our heads. On the shore I could see the twinkling lights of Javea and the soft beam of the lighthouse at Denia and Cabo de la Nao.  It was quite a nostalgic sight as we had been there on a number of occasions.

By early morning, the wind had dropped so the engine was on and by 09:30 Isla Vedra and Isla de Ses Bledes came into view through the murk of low cloud on land. 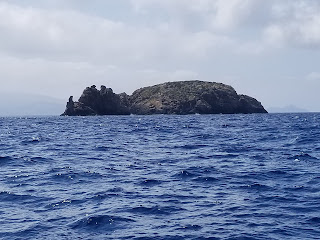 By 11:30 we passed through the passage between Isla Bleda Mayor and Isla Bleda Plana. A beautiful sight that we don't think we'll ever tire of seeing. The varied rock formations sitting proud in the sea are a sight to behold, but by far the most striking is Illa na Boch, known affectionately by us as the Witches Island. It looks like three giant old crones turned into stone by some ancient curse.

At 13:11 we tied up at the marina in Sant Antoni, exhausted but ecstatic at finally being back in Ibiza. Now where's the wine?! 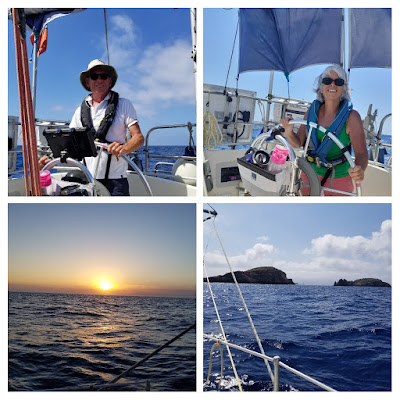