Arriving back in Ibiza was a big thing for us. After 20 months of not sailing further than the boundaries of Estepona,  to be out in the open sea and to have the freedom to travel again was simply awesome.
We spent two days in Sant Antoni, catching our breath, doing chores (there's always washing to be done) and preparing to go off cruising for 7-10 days. 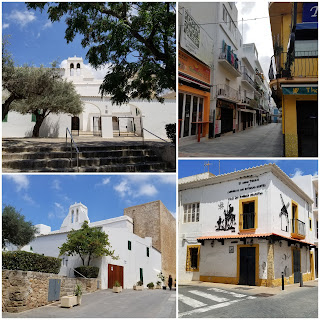 When we had previously visited Sant Antoni it had been a lively, busy town, full of tourists, noisy bars and full restaurants.  What a difference this time. Virtually no tourists, only a few souvenir shops open, bars and restaurants closed, it was like a ghost town. We did manage to find a lovely restaurant next to the church square which served delicious food and excellent wine.  We visited there a few times! We headed out of Sant Antoni down to the south west corner of the island where there is a little cala that overlooks Isla Vedra and from where we could enjoy a beautiful sunset over the Isla Vedra.

It was a calm afternoon and we motored south towards the island.  Despite there not being many tourists about,  there are still plenty of boats cruising around the coast.

We reached the anchorage late afternoon and was surprised by the number of boats at anchor there. Quite clearly it was a favourite spot! 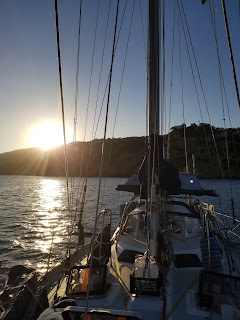 We decided it was too crowded for us so continued to the south coast and anchored in Porroig.  We had stayed there on our last night in the Balearics in 2019 so it was rather poignant that fate had brought us back here for our first night at anchor in 2021. Again it was quite busy and later we found out why. It would appear that when charter boats are not in use, they are sent out to anchor in the calas.  Keeps the overheads down!

After an uncomfortable night rolling from side to side on a slight swell, we pulled up anchor and headed north. Our destination was Cala Benirras, one of my favourite calas in Ibiza. Renowned for its hippy community, nightly drumming and dramatic sunsets, it is a place to just relax and let life wash over you.

But first, Mark thought it would be a great adventure to sail between the two rocks of Isla Vedra. As I was on the helm, I was not so sure but knowing that Mark had faith in my ability to do it, I trusted him to navigate us through safely. Under sail!

The gap between the two rocks is about 50 metres wide, and 28 metres at its deepest. There are a lot of outlying rocks so you have to be completely focused on what you're doing. 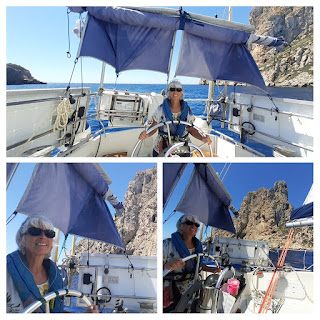 With a grip of steel on the helm and white knuckles trying to burst out, we set a course through the gap. Mark was constantly on watch and giving encouraging feedback and together we sailed through. He was as chuffed as ever to have gone through the passage, I was overwhelming relieved and rather pleased with myself. Next stop Suez Canal! 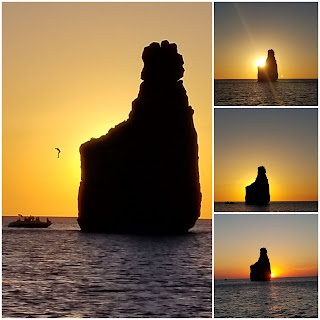 We reached Cala Benirras late afternoon and after a few attempts at setting the anchor, we settled down for the evening sunset. I was not disappointed. We had a perfect spot to watch the sunset whilst listening to the sound of the drumming.  What we hadn't bargained for was the entertainment, a spectacular dive off the rock, although it was a 'hold your breath moment.
Mark seemed to find his inner hippy, taking over the hammock for a front seat view of the drumming.  I think I even saw his foot tapping! 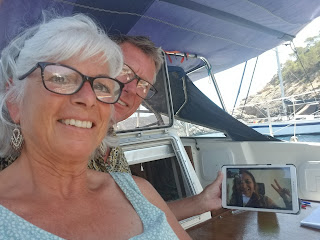 As beautiful as Benirras is, after a lazy breakfast and our Spanish class with our wonderfully patient teacher Rocio, we upped anchor and headed to Cala d'Albarca a few miles south.  This is one of Mark's favourite calas and we knew that here we would find peace and tranquility as the cala is surrounded by high cliffs and pine trees.  There are no beaches, restaurants or phone signal so it's not a popular stopping place for a lot of people. 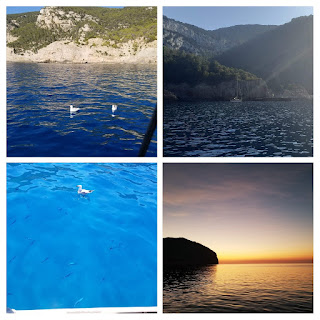 There we stayed for a few days,  relaxing and swimming in clear blue crystal water and enjoying the peace and tranquility and the surrounding nature.
With the weather due to change, we headed back south towards Sant Antoni. If the wind and waves became too strong we would go into the marina.

We dropped anchor in Cala Comte, which is between mainland Ibiza and Illa de Bosc and about 5 miles west of Sant Antoni. 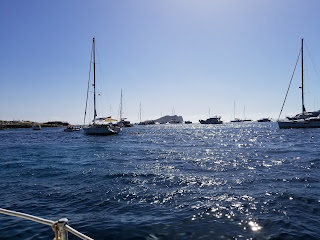 It was very busy.  Super yachts, motor boats, day trip boats, rhibs, jet skis, paddle boards, hover boards, inflatables etc.  If it could float on water, it was in this cala.  Great people watching though!

We did have a look at Cala Rojo next door, where we've stayed before and which we knew was quiet (except for when film crews turn up - see White Lines and a glimpse of Offbeat), but there was no room for us to anchor.

One of the things we are finding is the lack of anchoring space in calas, due to the pandemic and people jot being allowed to travel.  In the less popular anchorages the posidonia has spread, which has decreased the areas available to anchor in. It is illegal to anchor in posidonia in the Balearics and if caught, you can be heavily fined.

Someone once referred to it as their version of coral and there have been a number of projects around the islands to reintroduce posidonia to areas of seabeds which in turn provide breeding grounds for various species of marine life. 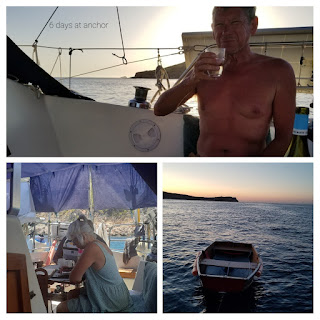 So, we stayed in Cala Comte for a couple of nights and caught up on some jobs.  I worked on our blog whilst Mark did some boat maintenance. The forecast for Wednesday was strong northerly winds arriving in the morning so I booked us into the marina for Wednesday and Thursday nights.

Tuesday night we had supper and watched the Spain v Italy football match. There was a party feel in the air and as the game progressed, the noise got louder and louder and when Spain scored, well ……

Full time and it was a draw, but that didn't stop the fireworks being set off, albeit prematurely as Spain was knocked out on penalties.

And then the wind arrived. And boy, did it blow! It had arrived early and completely caught us off guard. It was stronger than forecast and the speed at which it arrived was like someone flicking a switch on, like going from 0-60 in 30 seconds.

We both flew into action (pardon the pun) with Mark setting about securing things on deck, checking the anchor and letting out more chain. I sorted out the cockpit, getting everything inside.

And then the waves arrived. One metre waves on our bows, trying to push us back towards the beach and because the anchor was set firm, the bows slammed back down in the water.

Later, when there was a slight respite in the wind, Offbeat turned side on to the waves which meant we rolled from side to side.  Good job we had secured things in the galley otherwise it would have been carnage.

And on and on it went, until dawn the next morning, up and down, side to side. We were exhausted. We had dozed on and off during the night but not a proper sleep.

Thank goodness I'd booked the marina. Next morning it was obvious that the wind was coming back with a vengance and the waves were building up again. So, after getting the dinghy on board, which was an interesting challenge, we headed for the shelter of Sant Antoni.

Quite an eventful first week!