August / September 2020
Offbeat's Adventures have stalled a bit this year, as we have focused more on doing all those odd jobs needed rather than going off sailing for the summer.
We had planned to cruise either westwards towards Cadiz or eastwards towards Cabo de Gata, depending on which way the wind blew, but each time we made plans, something came up that scuppered it. Like diesel bug in the tanks, water leaking into the bilges and no wind!  Having said that, we have gone out for days and had some fun cruising along the coastline.
Our first excursion out on Offbeat was on the 1st August.  Looking back, we can't believe we waited this long to take Offbeat out, but when your boat is your home as well, it takes a bit of planning and lots of stowing away.
So, after a couple of days of putting tools, project work bits and odds and sods away, we were filled with excitement at the thought of going for a little trip and anchoring overnight.  Our plan was to go and find dolphins and then anchor in the bay of Playa del Cristo, which is just the other side of the marina.

Heading out of the marina felt so good, even though we were under engine, having a slight breeze caress your face and flow through your hair was so welcome.
Once out of the marina there wasn't enough wind to put the sails up, but it didn't really matter as we were just happy to be on the water.
And then, just as we heading north towards San Pedro, they arrived. The dolphins came to say hello. It was such a joyous sight and quite unusual for them to be so close but they were obviously hunting for food, so we changed course to follow them for a little while and then set anchor in the bay. We were so lucky that day as whilst we were setting anchor, another small pod came along. They were quite close to the boat but obviously feeding as we watched them heading south along the coastline.
Was this a good omen for our first night out at anchor? We hoped so!
Jumping into the Mediterranean for a swim was a complete shock to the system.  This was not like the balmy waters of the Balearics, more like the Walton Back Waters on a sunny afternoon.  It was freezing (well, 19°). A quick swim around Offbeat and we were back on board for lunch and siesta.
By late afternoon an uncomfortable swell had arrived and as there was no wind to face us into the swell, Offbeat's preference is to go beam on. We have learnt that the swell is a bit of a phenomenon in this part of Spain.  Even if we don't have strong winds in our area, the sea swell heads from strong winds hundreds of miles to the East and ends up crashing along our coastline.  It is known as the 'Moron' by locals and can last for days, forcing red flags on beaches with no swimming allowed.

By the time dusk arrived we had decided to go back into the marina for the night. As much as we love sleeping out on anchor,  with the swell knocking us from side to side, it would have made for a very uncomfortable night.
We were treated to a gorgeous sunset and although the trip hadn't gone to plan, it was a good day out.
Our next trip out was exactly the same.  Lulled into a false sense of security with flat calm seas, only to find a nasty swell creeping in as the day progressed.  No dolphins this time either to lift our spirits and the sea temperature was down to 16° which put both of us off going in the water. 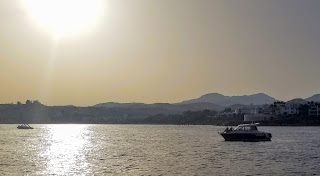 We had arranged to meet our friends Richard and Edita in the evening and raft up for a socially distanced glass of wine over sunset.   However, given the swell this wasn't possible so we just waved at each other at a distance and decided to head back and have drinks in comfort on our boats in the marina. 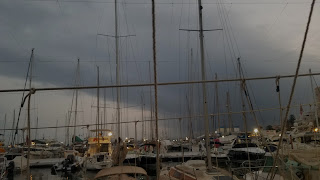 Just as well, as the wind blew and the storm clouds rolled in! 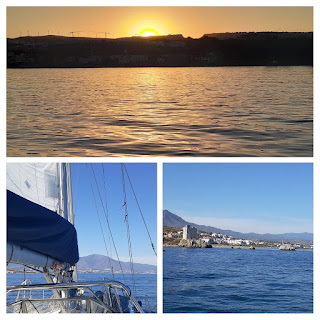 Mid August and I went to England for a week. Whilst I was away, Mark made the most of it and took Offbeat out for a sail (yes, there was enough wind!) And anchored out overnight off the coast of Duquesa in a nice little bay that reminded him - slightly - of the gorgeous anchorages of the Balearics. 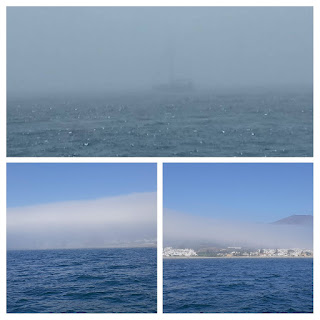 After a restful night at anchor Mark had a lazy morning. He noticed the coast about 20 miles to the East becoming fuzzy and then a wall of fog appear. It soon became a race to see who could reach the harbour at Estepona first. The fog won by about three miles! A fishing boat overtook Offbeat as he was creeping slowly along the beach, following the line of yellow bouys that mark the swim zone.  He decided to follow it in, thinking if there was anything in the way, the fishing boat would hit it first! It worked out OK.

Our daughter Georgina came to visit at the end of August. She's not a great sailor as she suffers from sea sickness quite badly, so we chose a flat calm day to take Offbeat out and possibly anchor overnight (if no Moron) in a sheltered area further down the coast near Duquesa, where Mark had stayed previously

We headed out of the marina and took a course towards the fish 'factoria' - a maze of nets and traps - which is just north of Estepona.  Based on previous experience and watching the tour boats, we knew that dolphins sometimes hang around this area. Twenty minutes out and we were not disappointed.  With binoculars in hand Georgina and I were on dolphin watch at the bow of the boat and could quite clearly see dolphins playing in the flat calm sea, so we changed course and headed towards them. 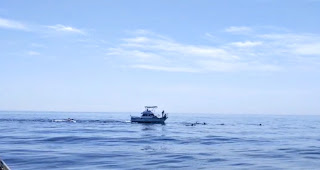 Unfortunately, so did another boat who, with engine at full blast, proceeded to go straight through the pod of dolphins and then chase them when they tried to flee.  It makes me so angry that people can't observe them from a distance and appreciate them in their natural surroundings.

Upset and disillusioned by the experience,  we headed off towards our planned anchorage. Although Georgina had got to see dolphins in their natural habitat, it wasn't quite the experience we wanted her to have.

We had no idea what was to come.  Motoring south, we saw another pod of dolphins. And they heard us. And then decided to come and check us out. Mark slowed the engine down and wow, what a treat we had. Between 20 and 30 dolphins, of all ages playing and flipping in the water, upsetting the flying fish. We even got to see one female dolphin nursing a very young calf. The pod stayed with us for quite a while, before we had to change course towards our anchorage. 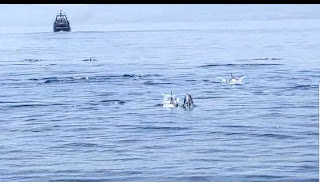 Our third sighting of dolphins was just past the entrance to our marina.  Heading south was a fishing boat trawling, and in its wake was a large pod of dolphins focused on feeding anything that escaped.   We could not believe our luck. One pod was a treat, but three pods in one day was absolutely awesome.

Shows over, we headed to the anchorage for swimming and lunch. When we arrived we could feel a bit of a swell, but nothing too uncomfortable. Mark and Georgina went for their swim whilst I made lunch. I say swim in a loose context, with water barely reaching 20°, it was a lap around the boat and back on board. 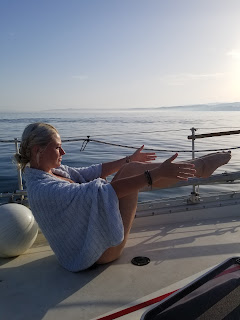 Following lunch, Mark went for his siesta whilst we went on deck.  For me it was sunbathing, which is bit of a rare treat and for Georgina it was an opportunity to practice her yoga on deck.  And then the swell arrived and yes, Offbeat turned beam on to it. With Georgina getting quieter and quieter, it was a sure sign that she wasn't feeling her best so rather than clean up later, we lifted anchor and headed back to the marina. 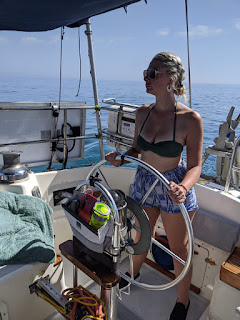 As it would take about an hour and we needed to do something to get Georgina to take her mind off feeling sick, we put her on the helm. There's nothing like being on the helm for the first time ever to take your mind off feeling sick.  She did a fantastic job and the look of concentration was a picture, although Mark wasn't so confident about letting her steer us into the marina.

Even so, it was a wonderful day at sea and gave Georgina a tiny glimpse of our cruising life and I think it's safe to say,  she was slightly impressed!

Offbeat's final day out so far was a spectacular sail in Force 6/7 winds.

Mark, his friend Richard and his son Richie took Offbeat out, marooning Georgie and I on shore.  We had a lovely time by the pool at the gorgeous hose of Richard and his wife Edita, who have become very special friends. Meanwhile Mark and the Richards headed out to sea in strong winds - Force Six to Seven for you sailors.

They started out reefed heavily but released more and more sail as they gained confidence. The waves got higher as they neared Gibraltar so Mark chose his moment to turn stern onto the waves and try to surf Offbeat! Yes, given strong enough wind and big enough waves Offbeat will pick up her skirts and break all theoretical speed limits on a boat of her modest type.

We have seen speeds of nine knots from time to time and Mark gleefully reports, 11 knots once. OK, 14 or 15 mph sounds slow, but its the equivalent of deliberately aquaplaning a family saloon car at 60mph. A touch wrong on the steering wheel and you'll be off the road and on the roof! But the waves were just a bit too small and a bit too short between each other.