After a fairly frenetic city break in Lisbon, we felt surprisingly energetic for our next big trip – 24 hours towards Lagos on the Algarve.  Note that ‘towards’. Its a term that mariners often use instead of ‘to....’  You should have a destination in mind, but writing ‘towards’ is a reminder that you might end up somewhere else. As we did. The other thing mariners do when planning passages like this one is identify ports of refuge – harbours and anchorages where you can pull into if something goes wrong. As it did. 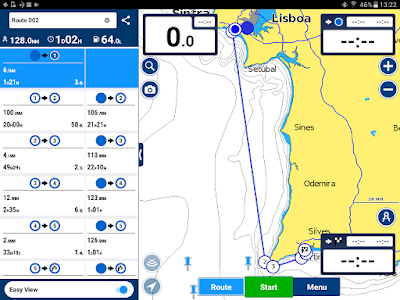 We dropped our mooring lines at 2.30 in the afternoon, pulling into Belem for fuel (Belem is Lisbon’s gateway to the Atlantic Ocean and a place we’d visited a couple of days previously). We motored out of the harbour into a stiff breeze from the north, perfect for bombing down the coast under our twin Yankee jibs (see the Vigo-Lisbon post). Once we had passed the rock ledges of Areal de Bugio, and Fort Bugio itself standing guard to Lisbon Harbour two miles off the coast, we turned south and set our sails.

Our plan was to sail close to the first major headland – Cabo Espechel – in daylight  then out across open sea (very deep in parts – a mile deep within five miles of Cabo Espechel)  through the night, turning East at Cabo St Vincent the next morning and getting to Lagos in time for a late lunch.

We started well, bombing down the coast at 6 knots and more – a good speed for Offbeat.  We had to run the engine for half an hour as the wind died just in front of the high cliffs of Cabo Espechel, but resumed sailing as we passed it, soon having to reef the jibs down as the wind picked up, which helps slow the boat down and keep control of her steering.  As we passed into deep water with nothing in our way until Cabo St Vincent 80 miles away, I chose to get a bit of sleep while Teresa took charge of Offbeat (when sailing at night we take turns to rest or sleep for between 1 to 3 hours while the other keeps watch over the boat; an electronic autopilot often takes over the steering).

I wasn’t asleep very long when I woke with a shock as I heard Teresa trying to start the engine. The wind had dropped and so had our speed. But the engine wasn’t starting; it just made a quiet ‘clunk’.  I guessed that either the starter or battery was at fault, so put out more sail to get our speed up again.  I must admit that I was in a pretty sleep-befuddled state and couldn’t deal with the engine problem immediately.  But by midnight the wind was dropping further and the forecasts were for calms the next day and by 2 am our speed had dropped to 2 knots (roughly equivalent in miles per hour) so I had to do something about the engine.

The battery checked out OK, so I started checking the starter motor. A quick and easy check is to see if the starter motor turns when the engine decompressors are lifted, removing most of the load on the starter. As I did this I spotted lots of white smoke coming out of the air filter. And as I removed the air filter, water gushed out of it.  Oh no, water in the cylinders, a very serious problem that can easily damage an engine beyond any repair.

So there we were, in the dark, 15 miles out to sea with a broken engine and the wind dying on us and not forecast to come back for another 12 hours.  At least we were 15 miles from one of the ports of refuge that I’d identified in my plan – Sines (pronounced sort of like Sinch), which was the very last harbour that Offbeat could get into until Lagos, 75 miles away.  It was a straw, but we were grasping at it with both hands!

At speeds now of just over 1 knot Sines would take 12 hours to get to so we’d have to have patience and resilience to stick to it, or bucket loads of luck. Or a very good friend who knows a lot about diesel engines. 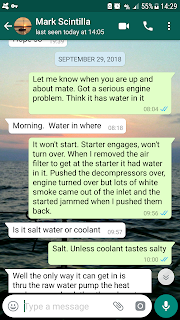 He’s lucky he was 1500 miles away cos I’d have kissed the bugger when the engine fired up and ran as though nothing had happened.  Oh, and we had the obligatory visit from some Dolphins during the engine repairs, its spooky how they know to lift your spirits when things are looking bleak!

We nursed the engine at a steady three and a half knots into Sines harbour, taking nearly three  hours, which seemed interminable until we remembered how long it would have taken under sail.

After a little break for some internal lubrication of our own, Mark talked me through the next four hours of oil changes and other action to preserve the engine from the sea water that had got inside.I also worked out how it had got there. During our passages down the Portuguese coast, the waves would have been following behind us.  Some of them would have splashed up the exhaust pipe; only a few drops at a time but the sea is relentless and those few drops added up to ten to twelve litres of water trapped in the exhaust system and then more water over-topping them to get into the engine.


Offbeat has defences against this happening – a swan neck half a metre above the waterline before the exhaust outlet and a waterlock near to the engine exhaust outlet.  But they are clearly not enough in following seas, so I’ll be making improvements. I’ll also be draining the waterlock regularly just to keep an eye on the situation.