When we arrived in Lisbon after 2 days at sea with difficult sailing conditions, we were greeted with some spectacular views that can only be appreciated from the river.

As we sailed up the river Tagus, the sun was shining and even though we were exhausted, we were exhilerated by the thought that we had achieved our goal of getting to Lisbon.

The riverside architecture and the views of Lisbon rising up above us on the hills were a wonderful sight for us. The architecture along the waterfront is a mixture of old versus new and here are just a few of my highlights. 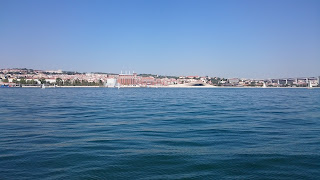 First there was the Belem Tower situated on a small island on the banks of the river Tagus.  It is a UNESCO world heritage site because of the significant role it played in the Portuguese maritime discoveries and was part of the defence system for Lisbon.

Next there was Padrao dos Descobrimentos otherwise known as the Monument to the Discoveries. Situated where ships would leave to explore and trade with India and the Orient, the Monument celebrates the Portuguese age of discovery during the 15th and 16th century.


After this came the Museum of Art, Architecture and Technology. Sitting on the river bank like a giant clam, you had the feeling that it was watching everything and everybody as they went by.

The piece of architecture that stands out most though was the sight of the 25th April bridge and the Cristo Rei (monument of Christ the King), which are truly amazing.  Known as the Golden Gate of Lisbon, at 1.5 miles long and 200 feet above the water, it is the largest suspension bridge in Europe and dominates the horizon as you travel up the river.


As Mark said in a previous post, we moored at the marina in Doca de Alcantara but as we were celebrating Alma's birthday we ended up staying in the apartment that Jo and Dave had rented.  As much as I love my £1,000 bed on Offbeat, the luxury of sleeping in a double bed was bliss!

It was lovely meeting up with Alma and Dave.  It made Mark and I realise just how much we do miss our families even though we're having the adventure of a lifetime.  Although it was going to be a short visit with our family, we were going to make the most of our time together with them.  So, in keeping with our tradition, Dave cooked us a delicious meal and the wine flowed!

Next day, after celebrating Alma's birthday with a sumptuous breakfast of Portuguese pastries and plenty of coffee (thank you Jo and Dave), we headed off to explore Lisbon.  I am so glad Alma was with us as I was finally able to get Mark on one of the city tour buses, something he had point blank refused to do previously!

With tickets booked for the city tour, we headed off to catch the bus.

I have to say that it was a bit of a bizarre bus route, which took us to motorways, derelict train stations and the airport.  Having said that though, there were some highlights and it was helpful to have commentary.  It also gave Mark and I a feeling for our bearings as we would be in Lisbon for a few days.


The oldest district of Lisbon is the Alfama. Once inhabitated by fishermen and the poor, it survived the 1755 earthquake with little damage and now attracts tourists with its labyrinth of narrow streets and small squares. 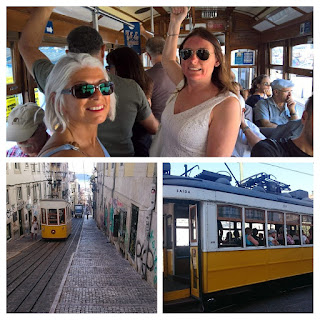 No trip to Lisbon would be complete without a trip on one of the famous yellow trams that take the less hardy person up the steep hills and narrow streets of the central city. Jo, Dave and I wanted to take a trip on one of the trams, but Mark and Alma didn't so they went off to find a cafe whilst we had the pleasure of being crammed onto a small tram.  In truth it wasn't too bad as the trams are used by local residents as well as being a major tourist attraction,  so the numbers soon thinned out. However, as we found out, you don't get to see any sights on the tram as the streets are too narrow, but what you do see is the look of sheer terror from tourists pressed up against brick walls hoping and praying they don't get squashed as w%e hurtle past on the tram!

Having ticked the box of riding a tram, we went in search of Mark and Alma as coffee was needed. I called Mark to find out where he was and he sent me a link via Google maps. Off we went to find them both, dutifully following Google maps and this is where I found him.  I did have to explain to him that it was his mum's birthday, not his! 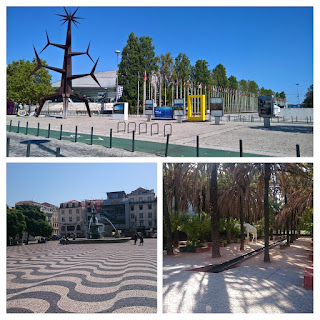 Refreshed with coffee, we had a further wander around Lisbon and then caught the city tour bus back to the Parque de Naciones where we were all staying.

The Park of Nations was the home to the 1998 World Exhibition and since then has become a home for cultural activities and contemporary architecture.

As we strolled through the park and along the avenues, we got to appreciate some of the sculptures and architecture that continues to make this a popular area of Lisbon and highlight how diverse the city of Lisbon is.

In the evening, to celebrate Alma's birthday, we headed off to Butchers,  a steak restaurant close to the apartment.  Not for the faint hearted or vegetarian, this wasn't any ordinary steak restaurant, this was a real steak restaurant that displayed joints of beef in glass refrigerators as they matured before being prepared for use.

We had a wonderful meal, with lots of chatter and laughter and judging by the photos, I think Alma enjoyed her birthday.

The next day we said our goodbyes and headed back to Offbeat.  We hadn't spent long tidying her up when we arrived, so the day was spent doing chores and shopping.

We had decided to stay in Lisbon for a few days, mainly to recharge our batteries as it takes it out of you sailing for 48 hours. Mark was particularly feeling it as he'd had the responsibility of skippering us and navigating us and Offbeat through the fog and round the headlands.

Whilst we were still in Lisbon, we took the opportunity to do a bit more sightseeing and have a night out at a Fado club. 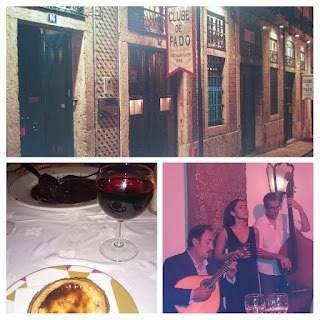 Fado is the soulful Portuguese music that is expressive and melancholic. Generally in Fado music, the singer will sing about the hard realities of the daily life, balancing both resignation and hopefulness that a resolution to their torments will occur.

I was intrigued to find out more about Fado music as this was new to me, although Mark has been a fan for years and when we had met up with Marisa and Mike,  Marisa had been insistent that we track down a Fado bar and experience the music live for ourselves.

So, that's how we ended up in the Clube de Fado in a shady back street of the Alfama district of Lisbon. And what an experience it was. From the moment we walked along the cobbled street into the club it was like being transported back in time.  The setting was modelled on days gone by with red velour furniture, crisp white tablecloths, silver service and wine waiters.  The food and wine were exquisite and best of all we had a table at the front with a first class view of the performances.  The music and singing blew us away.  Never before had we seen so much passion go into the playing of an instrument and the singing of a song.  We didn't understand the words, but we understood the pain and joy of every word sung.  For me, that was evidence of real artists at work.  There was one song when the singer sang 'mentira, mentira, mentira'  with such venom that we had to look up the meaning.  It means 'liar, liar, liar' and boy did she mean it!  I could have quite easily have returned there every night we were in Lisbon but unfortunately time didn't permit.

Our last big sightseeing trip was on a beatiful sunny afternoon spent at Belem on the west side of Lisbon, which is home to a number of monuments including Belem Tower and the Monument of Discoveries. It is also home to a beautiful network of parks,eronimoes Monastery and the Maritime Museum.

The Jardim da Praça do Império is one of Europe’s largest plazas.The grounds of the plaza sit behind the Monument to the Discoveries and are filled with decorative and symmetrical water gardens, with a grand fountain as the centrepiece.


The Mosteiro dos Jerónimos is an extravagant monastery that was funded by the tax levied on spices that flowed into Portugal. Originally designed as a modest monastery complex, the excessive trade wealth extended the construction by 50 years, to create one of the most ornate religious buildings of Portugal.

The site has a close connection to the early explorers, as Vasco da Gama spent his last night here before his epic voyage to India. Later the church was the location where sailors wife’s would come to pray for the safe return of their loved ones.

The photos don't really do justice to the beautiful masonary carvings that adorn the frontage of the monastery.  You cant help but wonder how many man hours went in to this work as they are truly spectacular.

Mark was particularly keen to visit The Museu da Marinha, which details Portugal's maritime history and is housed in the western end of the Mosteiro dos Jeronimos. Unfortunately photography isn't allowed in some parts of the museum so we don't have many photos but it was really interesting finding out about the maritime history of Portugal and the important part they played in discovering India and opening up trade in the Orient.

If I had to describe Lisbon in a word, it would be enchanting. The city is captivating,  charming and delightful.  There are so many facets to Lisbon that it bewitches you and leaves you wanting more, but unfortunately we had to move on so with a tinge of sadness we slipped our lines, headed out of Doca de Alcantara and back down the river Tagus, absorbing the views for one last time.