The Toughest Trip: Sines to Vilamoura

After our engine failure off Sines, you'd think we deserved a bit of an easy passage the next time out, yeah?  No. I think it was the toughest sailing trip I've had in forty years of sailing.  But it had a very redemptive end, so don't worry, dear reader.

We planned another 24 hour passage; firstly 60 miles South to Cabo St Vincent, then 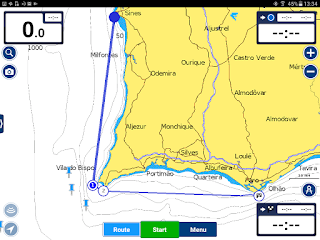 turn East for another 50 miles towards Faro, near the easternmost end of the Algarve. In order to arrive on the Algarve coast in daylight, we had to round Cabo St Vincent in the dark. Rounding headlands is something I prefer to do in daylight, but I prefer even more approaching harbours in daylight; headlands are generally high and well lit (Cabo St Vincent certainly is) but the coastline around Faro is low and has sandbanks and huge fishing nets off it.

We left Sines at ten in the morning. There was little to no wind, so we knew we were in for a long test of the engine. We had the sails up but the engine was doing most of the work keeping us moving forward. As night fell, it was still hot and just T-shirt weather.

As we approached Cabo St Vincent at around 11 pm Teresa noticed the horizon starting to get a bit blurry. I'd gone below to get a bit of sleep before we had to be alert rounding this notorious headland, so she woke me.  Then we heard the skipper of one cruise liner call up another on the VHF radio. ''What's the visibility like with you? cos its nearly zero where we are'' ''Same here, I'm afraid'' ''Oh well, hope you have a good watch mate, see you in Southampton''.  Bastards! how can they be that complacent?

By midnight fog had closed the visibility down to nearly zero. We could see a murky glow from Cabo St Vincent lighthouse and occasionally a shaft of light would penetrate through a break in the fog.  We edged our way nervously round, caught between a rock (the cliffs of the headland) and a hard place (the shipping lanes about 7 miles further to seaward, our senses stretched to try and spot any dangers out in the gloom.  At least we hadn't seen any fishing vessels for the last 30 miles and the AIS set seemed to indicate they were doing the sensible thing by staying in harbour.

We rounded Cabo de Sagres at 1a.m. in a break in the fog, helping us to reorientate ourselves to the Algarve coastline.  We also got a hefty whiff of new (to us) lands as the fragrance of cedar, cinnamon, sandalwood and pine overwhelmed our (admittedly deprived) senses. Coasts have only smelled of seaweed and ozone before; these much more exotic smells combined with the clear horizons lifted our morale. And then it was dashed within an hour with the fog returning as thick as ever.  And then the fishing boats started popping up on the AIS screen.

We then spent an incredibly anxious six hours dodging fishing boats and a couple of other yachts in the fog, staring into the AIS screen as much as into the fog, blowing our foghorn every couple of minutes and hearing no responses in return. None. No-one sounded their foghorn, even vessels that were within half a mile of us at some points. 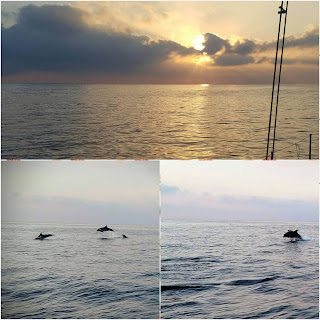 By half five, the fog had broken up enough for Teresa to get some sleep after being on
watch for over eight hours in the most stressful conditions.  I was then privileged to witness a gorgeous sunrise. I was just getting some photos and a bit of video when I heard a familiar splash behind me.  I turned with the camera just in time to capture the Dolphins arriving.  Of course, our morale needed picking up, so they knew to answer the call.


At 9a.m. we had breakfast and discussed our options.  We worked out that we might not be able to get into Faro harbour until near nightfall (the pilot books and almanacs disagree on when you should enter this maze of tidal rivers and creeks) so chose to head for one of our ports of refuge: Vilamoura.  The sun shone, the wind blew fair, and we had champagne sailing conditions all the way to Vilamoura harbour, tying up at just past midday. 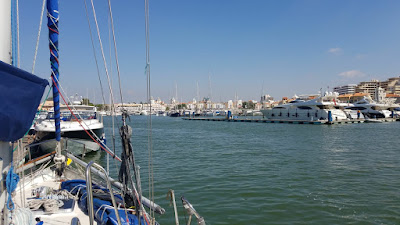