Murky goings on between Vigo and Lisbon

Just after 3pm Teresa, my sister Jo and I slipped our lines at the Real Club Nautico de Vigo and headed down the ria towards the ocean. Our plan was to head about 10 miles offshore and then sail  down the Portuguese coast for 150
miles dodge past the Islas Berlingas, go south a bit further then bowl into Lisbon about 48 hours after leaving Vigo, in time to meet my mum and my brother-in-law Dave.  Since the prevailing wind at this time of year is northerly – the Portuguese Trade wind – we rigged two foresails – twin Yankee jibs for the sailors among you – and poles sticking out from the mast to control them.

Reality, as we so often found on this voyage, often falls short of what the books and the weather forecasts promise.

When we passed Cabo Silliero at the mouth of the Ria de Vigo we found no wind, but a lumpy swell coming off the ocean which made Offbeat plunge up and down like a demented rocking horse.  We  plodded on under motor with me saying ‘’I expect we’ll get the wind once we’re clear of the land.  I’ll just get some sleep now so I’m fresh when we get offshore and it starts to get dark’’.  It turns out that I missed a great wildlife display, with Jo and Teresa watching Dolphins jumping, Gannets diving and young Turtles flapping around in that vaguely helpless way they seem to have.  When I woke at half past six, the swell had settled down, as it usually does once we are in deep water though the wind hadn’t shown up.

As we turned south when night was falling we encountered one of the things that sailors hate most – the swell on the side of the boat making us roll first one way then another, without wind in the sails to resist it.  And then we encountered something that sailors hate even more – thick fog.  I had chosen a course that avoided the main shipping lanes 5 to 10 miles further offshore and the many fishing boats, nets and marker buoys closer inshore.  We spent the night anxiously peering into the murk and at our AIS screen – an electronic collision device.  We had to alter course a few times to avoid close encounters with cargo ships heading into Porto and Figuera on the Portuguese coast. Having my sister Jo with us on this trip was brilliant anyway, but having the extra pair of eyes and quick mind while ploughing on anxiously was a double blessing.

A light northerly wind turned up during the night, so we got the sails up but needed the motor to keep up anywhere near enough speed to get to Lisbon on the Sunday. At least having sails up steadied the rolling of the boat.  It is also supposed to make the boat more visible to other vessels, but with visibility down to less than a quarter of a mile, I’m not sure it would be of much help.

One little highlight during the night was a visit from a couple of Dolphins, their bodies etched out in phosphorescence. If you haven’t come across phosphorescence at sea yet, its a really peculiar phenomenon.  You know how some watch faces have numbers that glow in the dark? Well that’s phosphorescence and its a trick that tiny sea creatures evolved eons ago.  They glow in the dark in response to disturbances such as movement in the water, looking like a thousand tiny suddenly sparkling in the water.  And that movement includes Offbeat splashing through a wave and Dolphins swimming; its a really amazing thing to see.  But impossible to photograph, so you’ll have to use your imagination!

Dawn broke damp and foggy and I started to make plans to head for Nazarre - a port on the Portuguese coast - rather than risk tackling passing the rocks of the Islas Berlingas in the fog.  I was also starting to worry that we wouldn’t
have enough fuel to motor all the way to Lisbon; Offbeat only carries enough fuel for 48 hours at fairly low speed and we’d been pressing on a bit faster during the night to stand a chance of making Lisbon at a reasonable time. Adding to my worries was a couple of strange incidents. So, we are 15 miles off shore and in thick fog – a long way from any hope of rescue – and listening to the VHF radio to help work out where the ships are when a creepy voice comes out of the loudspeaker ‘’I can’t see you, but I can smell you’’. He repeats it a few time over the next half hour, weirding not just us out, but the officers on some of the ships out there too. They respond in a mixture of English and (I think) Bengali which just eggs him on. We work out he’s just some racist t**t taunting the crews of Asian-run ships.  But for a while I regretted every horror film I ever watched.  The strangeness was compounded by coming across isolated fishing marker buoys. Now we are 15 miles from shore and the water is over a kilometer deep. I’m pretty sure the only fishing out here will be trawling.  But we are close to the shipping lanes and I’ve read of bales of cocaine being chucked off ships with a marker buoy and a tracking device, to be picked up by smugglers in high powered speedboats.  And the pilot guides and charts warn that you have to report any suspicious activity to the authorities.  But I’m not going to be broadcasting that I suspect a drug drop and here’s my position. Cos the bad guys listen to the same radio channels, too, and we know what happens to snitches.  Now I’m regretting every drugs crime film I’ve ever watched!

It wasn’t until one in the afternoon that the wind picked up enough to sail at over 5 knots (roughly equivalent to 5 miles per hour for you landlubbers, a respectable speed for a sailing boat like Offbeat). By half past three the fog 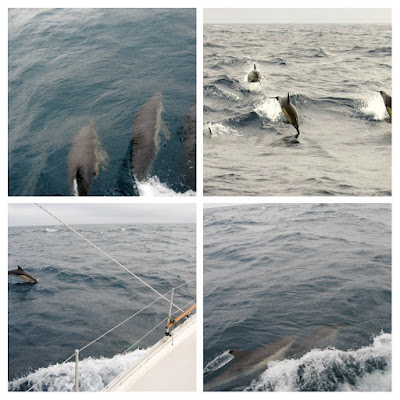 cleared – gosh that had been a long and stressful eighteen hours. As though to celebrate our relief at being able to see what was going on around us, we were treated to the best Dolphin display of our voyage so far; 30 minutes of Dolphins jumping, spinning, swimming under the boat, swimming alongside the boat, swimming upside down, surfing in the bow wave and generally arsing about and washing away the anxieties of the night. Shortly after that, we had a discussion about pressing on to Lisbon or pulling in at Nazarre.  We all felt fine – we had all been taking 1-3 hour breaks to get some sleep – the wind was perfect, the visibility was good, Offbeat was looking after us well and, hey, the Dolphins had given us their blessing.  Lisbon it was.

The night remained clear and the wind pushed us quickly down the coast. In
fact a little too quickly and by mid morning it was up to Force 6 and our sails were down to their smallest size (3rd reef for the sailors among you and still doing 6kn through the water our twin Yankees roll up on the furling gear, making them incredibly flexible for running downwind. Much easier to manage than a mainsail).
As we approached Cabo de Roca – our waypoint for approaching Lisbon – fog rolled down from the mountain. We all had a ‘oh, what, not again, not now’ 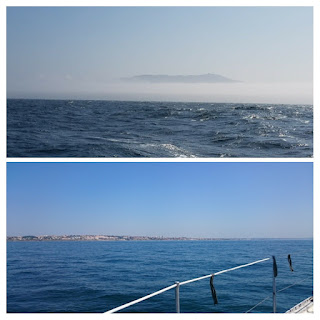 moment, but luckily the fog stuck to the land and we sighted first Cascais and then Lisbon itself after an epic 45 hours at sea.

It still took us one and a half hours to motor through Lisbon and moor up at Doca de Alcantara, right in the centre of the city. And another couple of hours to tidy up the boat, do the paperwork for the marina and customs, get a taxi and then track down the apartment that Jo and Dave had rented, and celebrate her birthday with my mum.  But the joys of Lisbon are for another blog entry. 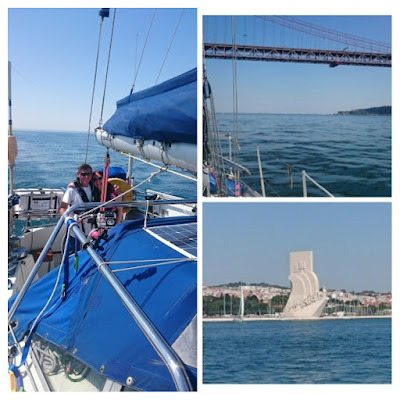