We headed out of Ria de Muros and Noia early on Saturday morning as it was an 8 hour passage from Muros to Ria de Arousa and we wanted to get there before  Again there was no wind and again we were under motor.  However, it did give us the opportunity to appreciate the beautiful dramatic coastline along the way.

To get to Ria de Arousa you have to navigate a number of rocks and islands along the way, so there are two routes you can take – either on the outside of all the rocks and islands or slowly navigate your way through them.  We had planned our passage based on the weather forecast, which was predicting between 12-15 knots.  We were lucky if we were getting 5 knots.

As the wind was so still, Mark decided that it was safe enough to take the inner route into the Ria and go through the rocks and islands.  Wow, what a treat it was. Not only did it take a couple of hours off our journey, but the scenery was amazing.


We went past Isla Salvora, which is part of the Atlantic Islands National Park.  These are protected islands and to anchor or visit them you have to have a permit and book in advance as the authorities control the number of visitors at any given time. Anchoring or landing without a permit or permission can lead to a hefty fine.

Ria de Arousa is the largest of the Rias and was once the most wealthiest part of the region. It is home to half of the mussel farms in the Rias and they claim that their waters produce the best seafood in the country.  They also claim that some of Spain's best white wines are produced in Cambados, capital of the Albarino wine.

I have to say that we didn’t do a lot in Ria de Arousa. We found a little bay with a pretty sandy beach to anchor in on Saturday and stayed there until Monday. 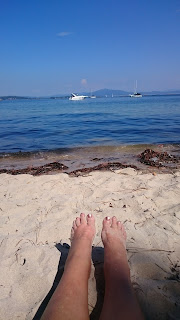 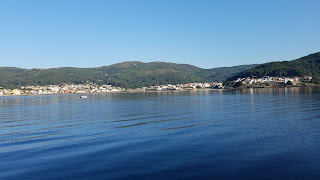 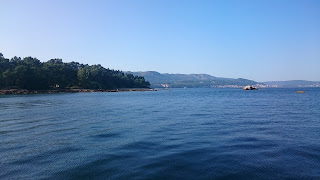 We would have probably stayed longer, but we were awoken by is loud fisherman trawling the bay which we were anchored in. Clearly it was a ripe area as we'd  seen numerous divers and small boats with fishing rods protruding from the back over the weekend. 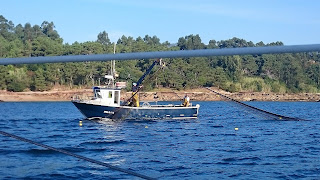 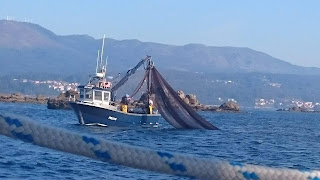 So, we pulled up anchor, had a sail around the Ria (yay, there was wind) and then dropped anchor in a small bay behind Isla de Arousa and watched the most beautiful sunset. 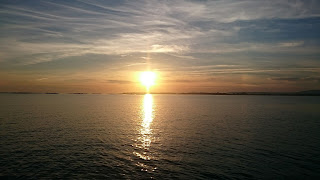 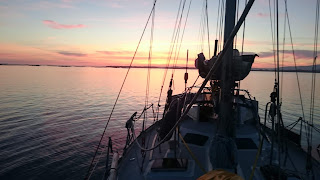 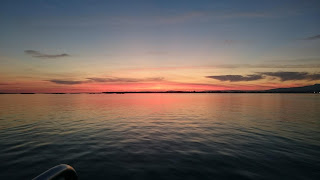 Tuesday we pulled up anchor and headed off to Ria de Pontevedra.