We sailed into Ria Pontevedra on Tuesday 11 September and headed straight for the marina at Combarro, which is at the head of the Ria so we got to see some lovely sights along the way.

The reason we headed straight to the marina was that on Wednesday we were travelling by coach from Combarro to Porto in Portugal to visit our friends Mike and Marisa. Marisa is from Porto and they were there visiting her family and as it is only 3 ½ hours by coach we decided to visit Porto whilst they were there.  More about that trip later as it deserves a blog on its own.

We returned to Combarro on Thursday evening and as we crossed the bridge to enter the village, we saw the shoreline which looked absolutely amazing and which we had to explore the next day. 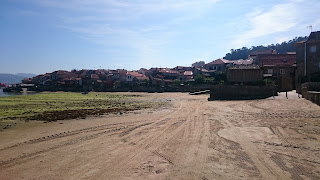 After catching up on chores and doing the shopping, we headed off to explore the old quarter of Combarro.

The old quarter of Combarro has been declared Property of Cultural Interest as it has examples of three traditional architectural elements in Galicia, which are: Horreos (raised granaries); Casa Marineras (sea houses) and Crosses. 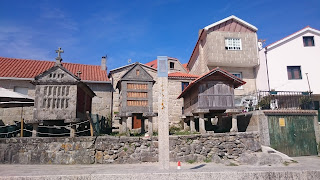 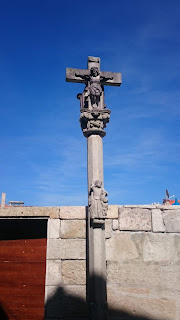 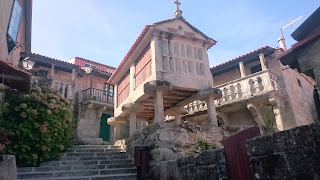 We wandered through the old quarter, which is comprised of narrow cobblestone streets with roads so narrow you can just about get two people walking side by side. There are narrow arcades and balconies made of stone and wood, depending on how wealthy the owner was. The houses are still lived in and well preserved and cared for by their owners.

The cobbled streets take you down to the shoreline, where you can view the old quarter from the beach and which was the view we had seen the previous day. It was even more stunning seeing it close up, as it is a jumble of old fishing houses surrounded by raised granaries, which were built in the 18th and 19th century to store food. 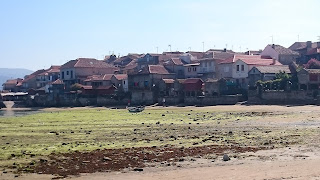 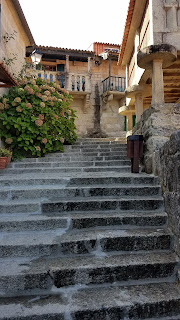 Walking through these streets and on the shoreline, you got a real sense of what life might have been like for previous generations.  The houses close to the shoreline would have been very basic and life would have been hard for the families dependant on fishing to make a living, but the further you headed into the old town, the grander the houses became, especially around the town square.  It was interesting to see that even now, there are still the mature Senoras watching the world go by from their balconies, taking in everything that is going on around them.

On Saturday we headed out of Combarro and found a pretty little anchorage, where Mark practiced his fishing and I got to do some serious sunbathing! It was so relaxing as we were the only boat moored there, although a couple did come along later in the day but headed off again in the evening. 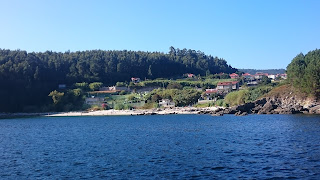 On Sunday we managed to find time to go ashore and headed into the nearest village of Areas where we had some refreshment and watched the world go by. We walked back to our anchorage along the shoreline which involved a bit of scrambling in the woods, but the views were worth it.  Seeing Offbeat in the anchorage on her own was like a dream come true for Mark and was one of those lump in the throat moments as the realisation that we had sailed her there started to hit us. 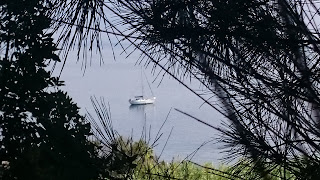 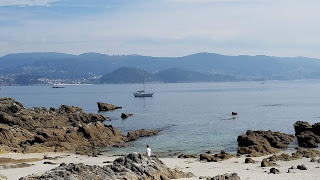 Later, on Sunday evening we were treated to a beautiful sunset and settled down for the evening. 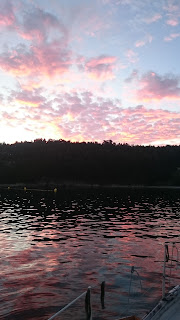 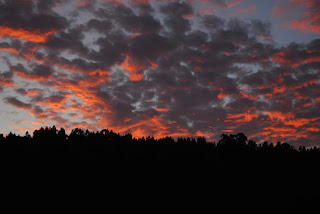 And then all hell broke loose!

Mark was already in bed and I was on my way when I heard the roaring engine of a fishing boat nearby.  Naturally nosey I went on deck to see what was going on, but when the boat pulled up alongside Offbeat and there was a man talking very fast and very loud and gesturing with his hands, I kind of wished I’d have minded my own business!

Anyway, it turned out he was a good Samaritan and was warning us of bad weather conditions that were on the way, particularly serious sea swell which could potentially be dangerous as we were in a bay surrounded by rocks and if our anchor were to give way, it could make a serious dent in our boat.

Like lightning, Mark was dressed and on deck, pulling up anchor.  I was at the helm ready to steer us out of the anchorage and take us back up the river to a more sheltered area. By now, it was pitch black and we had to use all our skills and knowledge to navigate and anchor in the dark (thank you Sara Hopkinson, you taught us well).  I have to say that we worked well as a team that night and within a couple of hours we were out of danger and having a drink to calm us down.

The bad weather, thick fog and rough seas, stayed with us for a couple of days but by Wednesday the sun was shining and the sea had calmed so we pulled up anchor and headed for Ria de Vigo where we were going to be joined by Jo (Mark's sister) who was helping us sail Offbeat to Lisbon.