After a week spent in A Coruna and with a mixture of sadness and excitement, we slipped our lines on Saturday afternoon and headed to a little bay close by, ready for an early start on the first journey south.  I had a twinge of sadness to be leaving as A Coruna had provided us with all the things we needed to unwind and process our journey- not just across Biscay, but the last twelve months as well.  So much has happened in the last year, you just need to stop and take stock. However, by Saturday we were both ready to leave and excited to start our journey south.

A Coruna is a beautiful town, a real mixture of old and new.  It is very obvious that money has been invested in the town, especially around the waterfront, but they have kept the charm of the old town. There is a lot of history to A Coruna and it is well worth a visit in its own right

After hitting the town on our arrival, we had a wonderful meal in a local restaurant.  We had the biggest plate of meats I’ve ever seen, together with tortilla, prawns, chorizo and lots more. Washed down with 2 bottles of wine, we all slept well on our first night in Port.

After a leisurely breakfast of croissants and cakes, provided by Mark S, we set about sorting Offbeat out.  Chores included cleaning the galley and heads, washing down the decks and doing the laundry (5 loads!).  It was at this point that Mark S decided he should take his leave as he was booked on the early evening flight to London.

Saying goodbye was quite emotional.  Being in close company for 10 days, Mark and I had built up a real friendship with Mark S and we we’re both going to miss him and his quiet calming influence. So, with a tear in my eye, we had a group hug and waved him off with a promise that he will be our first choice for crew if and when we sail across the Atlantic!

On Sunday I got up bright and early and went to Church.  I am not particularly religious, but those that know me know that I am a practising Catholic and attend mass a few times a year.  For some reason I really felt the urge to go to church and give thanks for crossing Biscay safely.  I have to say that I found the journey across Biscay both physically and emotionally hard at times, but I came through it a stronger person.

After church I wandered the streets of A Coruna and fell in love with it. It’s narrow streets with lots of different shops, coffee bars and restaurants all coming to life on a Sunday morning was a joy to behold. I couldn’t wait to get back to Mark to tell him about the town, although it did take me 3 hours! 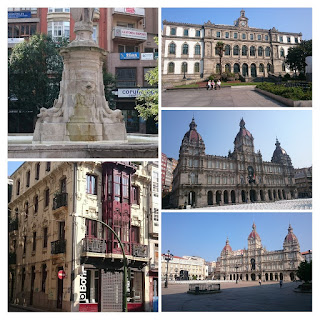 With my excitement and enthusiasm about the town piquing Mark's curiosity, we set out on Monday to explore.  It was wonderful! We walked for miles around the town, taking in the old with the new; walking the length of the beach, up around the headland to Hercules lighthouse (the oldest one in the world built by the Romans), round by the old marina and back into town.  It seemed a bit weird standing on the headland and seeing Hercules lighthouse from the other side, as the last time we saw it we were lookimg up at it in awe, not really believing that we'd just sailed 450 miles across the Bay of Biscay.  It was also rather poignant that a lone bagpiper should be practicing his playing while we were there too. 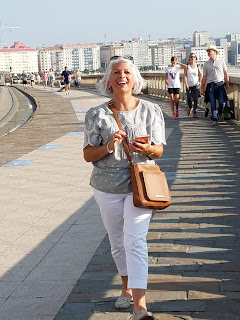 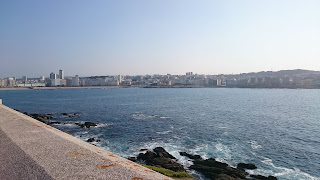 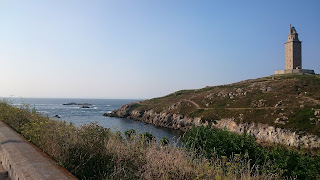 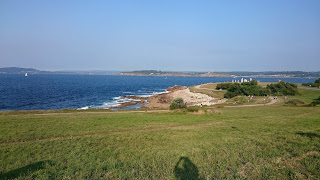 Once back in town, we ended up in a little spanish bar in the old town. The food and wine was fantastic, as was the graffiti dominating the walls of empty buildings around us.  Whilst eating dinner we heard the laughter of children, the chatter of adults and the distant sound of music being played.  This was Spain at its best! 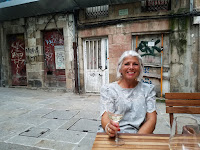 The rest of the week was pretty uneventful, except for when we woke up one morning to find a cruise ship moored at the end of our pontoon.  Bearing in mind the average yacht is 36ft, finding a 280 metre ship at the end of your pontoon is pretty mind blowing.  The PA system and cabaret rehearsal got a bit tiresome, but with a hoot and a wave they were gone by 4pm.

So, other than that excitement, we spent our time pottering around, with Mark doing jobs on Offbeat and me taking 4 hours to go and get the bread and milk from town!