Hey ho and away we go!

We left A Coruna on Saturday 25th August with the sun shining but no wind in our hair. After the arrival we had, surfing in on the waves and hand break turns into our pontoon, our departure was a lot more sedate!

We had decided that we would anchor at Praia de Mera,  which is a little beach cove directly opposite A Coruna that provides shelter from Northerly winds. However, what it doesn't do is provide shelter from the swell of the ocean and we bobbed around like a pea on a drum all night.  Having said that though, the views were spectacular and we had a relaxing evening having supper and watching the sun set. 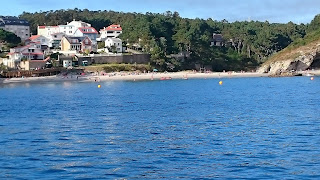 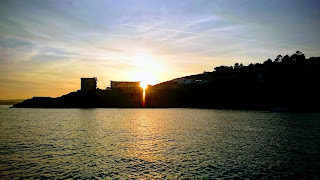 Next morning we were up and off by 10am, heading to the first destination of our adventure to southern Spain. We had decided to stop off at Porto de Corme for the night, en route to Ria de Camarinas.

Once again there was no wind, so we had to motor most of the way. By now poor Mark was finding this tedious, was he ever going to get to sail Offbeat?

We had been motoring for a couple of hours when Mark shouted 'Dolphins off the stern'. If you haven't ever experienced sailing with Dolphins (like me until now) they nearly always tend to join the boat at the back (the stern) then swim alongside the boat (to see if you're playing) and then swim at the bow (the front) of the boat, chasing waves and swimming underneath the boat.  The sight of these beautiful creatures doing this is spectacular and will keep you entranced for as long as they are there.

On this particular day, after Mark called 'Dolphins', we had a pod of about 12 to 15 join us, they were everywhere.  As the water was so calm and Mark was on the helm, I went to the bows and experienced first hand these beautiful creatures playing with Offbeat.  They stayed with us for at least 20 minutes and we got some fantastic photos and video. Unfortunately I can't upload the video as it's too long, but when I get 5 minutes I'll trim it down. 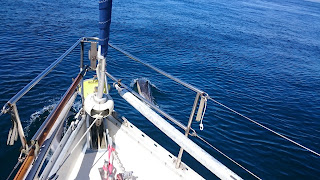 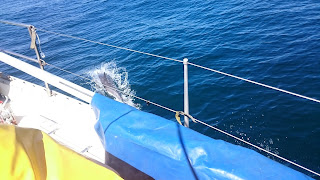 They left as quickly as they came, but leaving us with smiles on our faces and plenty to talk about for the next 1/2 hour! On we motored until we saw something flapping around in the water.  I got the binoculars out and looked to see what it was and on closer inspection it turned out to be a solo baby turtle, flapping its flippers in the water.  It looked so small and vulnerable and out of place in the big wide ocean, but seemed to be going about it's business so we continued on our way.  We still wonder if it's ok!

Compared to that, the rest of the journey was uneventful and we arrived in Porto de Corme by late afternoon.

Corme is a pretty little fishing village, surrounded by a number of little sandy beaches and a church which chimed Ave Maria every hour.  We decided to drop anchor opposite a beach just off centre of the town.  We sorted out Offbeat, had a drink and something to eat and decided to have an early night (sailing can be knackering!).  Tucked up for the night, we were just dozing off when the firework display starts.  When I say firework display, this is a loose term in Spain as it usually consists of bangers, very big and very loud bangers.  And that's exactly what we got, for 30 minutes!  We thought it was never going to end, but in the end the guy ran out of matches and went home.

Next morning having breakfast in the saloon cabin we decided to stay at least one day in Corme. The beach was very enticing and Mark was itching to get out on the dinghy.  It is a Seahopper, which is a foldable wooden dinghy that can be sailed, rowed or motored with our outboard motor.  It too has a name and is called Upbeat!

The plan was, after getting Upbeat sorted,  Mark was going to drop me off at the beach for a few hours whilst he went off sailing on Upbeat. And then we heard the bagpipes. They were being played very loud and coming from the village.  At first I thought it was a recording being played but Mark was convinced they were 'real'.  The slight off tune notes convinced me they were real too.

I can honestly say I don't think I've ever seen Mark move so fast. He was a man on a mission, he wanted to see the bagpipes and nothing was going to stop him!

With Upbeat ready, we lowered her into the water and Mark rowed ashore. He rowed her on to the beach nearest Offbeat, but it didn't have any where to securely moor her, so Mark rowed her round to an area where we could haul her out and lock her securely,

By this time, the bagpipes had finished. The disappointment on Mark's face was like that of a child being told he couldn't have another slice of chocolate cake.

Dispondent, we did what we always do when we need cheering up, found a bar and had a drink.

The little bar was also a restaurant, but they served small plates in the bar.  We are both very keen to learn Spanish so I started translating the bar menu.  I was ok until we got to Casserole Cat and Sperm Whale.  Either the locals have very weird tastes or Google Translate can't cope with Galician menus.  Not to worry, I opted for coffee and cake!

Coming out of the bar we noticed a leaflet advertising the village's fiesta, which was taking place that weekend, hence the fireworks.  It was also advertising a procession in a little while, so we decided to head further into the village to check things out. 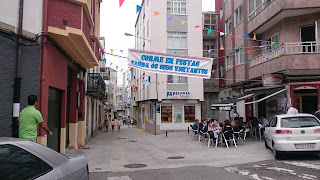 We couldn't believe our eyes, the bagpipe players were sitting at the bus stop. Mark was rather upset at the thought of the band having to get the bus home.  However, the bus stop was opposite the church and there was clearly a mass going on, but as it was at the communion stage I knew it was coming to an end.

As we milled about outside the church, the commotion started.  The church bells started ringing Ave Maria, the bagpipes, drum and accordion started warming up and the congregation started spilling from the church.  The next thing we knew was we were caught up in the holy procession around the village. The procession involves carrying statues of the Saints that are being celebrated which are held aloft by members of the congregation.

It turns out that the bagpipes were there to lead the procession of villagers from the church around the village.  The ladies were  wearing their best outfits, gentleman wearing suits and the children wearing their Sunday best. Families take part en masse in these processions, from great grandparents down to babies in arms.

Procession completed, everybody headed back to the church for a final blessing (Mark stayed outside) before heading their separate ways, which in true Spanish tradition, was mainly to different bars and restaurants for a family meal.

We felt very lucky to have taken part in the procession as it really is a sight to behold and Mark was even more ecstatic when he managed to get a photo of the bagpipe players going past Offbeat. 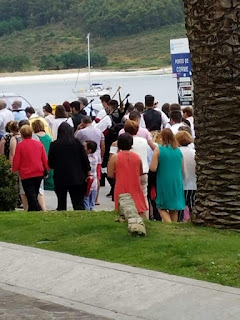 Needless to say, I didn't get to the beach and Mark didn't get to sail Upbeat.  After too many glasses of wine and tapas Mark rowed us back to the boat where we spent a leisurely evening doing nothing.

Although there was another Fiesta day in the village on Tuesday, we had to be making tracks. So, it was with lots of memories and a special bond made with Corme that we headed out of the bay en route for the Camarinas.
at September 01, 2018