The Bit In Between!

Some of you will have noticed that there's a bit missing between setting sail at 15:15 on Thursday 9th August and our actual crossing which started on Monday 13th August.

There's a very simple answer, Force 7 storm! For those that don't know, that's 28-35 miles per hour. Doesn't sound much does it, but next time you're driving at 30mph, stick your hand out of the window.  Then imagine that force against your whole body. Bloody scary!

So, we set off Thursday 9th August having done all our weather checks.  The forecast was good, with northerly winds to blow us down to northern Spain. However, what you have to understand is that all the predictions in the world cannot be accurate.  The weather is like a petulant teenager, it can change on the turn of a sixpence!

So, we left Plymouth with fine weather and set our course.  The plan was to sail South, past the Eddystone Light, then South West along the English Channel.  However, by nightime the two Mark's were tacking against Force 6-7 winds from the SW, rough seas and rain squalls. By this time, for the first time on this journey I was suffering from sea sickness. I'm still not sure if it was the journey that made me I'll or whether it was because I was scared witless. 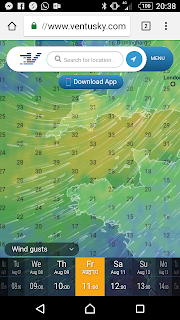 By sunrise the weather had not improved and on the 06:00 forecast  there were now gale force warnings (for those in Suffolk that's close the Orwell Bridge wind!).

With this latest information to hand, Mark made the decision that we would head back to England to wait until the weather had passed.


I for one was very relieved.  It had been a very long night for the guys as I hadn't been able to take my turn at the helm and I am forever grateful for the way they both looked after me.  I know it wasn't easy for them as tacking in Force 7 winds is really tough, but they never complained, they just got on with it. 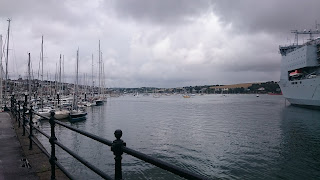 We arrived in Falmouth late Friday afternoon, tired and battered but still in one piece with our sense of humour still in tact.

And guess what, it was the start of Falmouth week so we did what any sensible person would do in Falmouth, ate fish and got ever so slightly drunk!

P.s. Not many photos were taken on this bit!

Chilling on the South Coast!