Dover to Brighton was a hot and windless trip. The thermometer showed 43 degrees C in full sun in the cockpit . 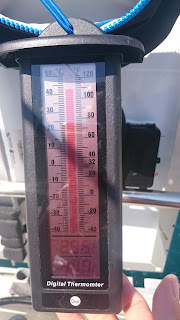 We improvised shade with an umbrella and sheets which made the temperature bearable. 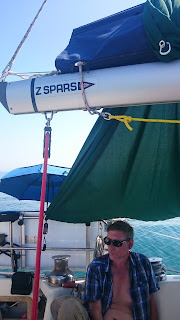 Nonetheless, motoring over calm seas soon got dull though, so we took turns sheltering in the cabin, which benefits from three fans. Bliss.

We passed two key headlands today: Dungeness and Beachy Head. The contrast between the two is amazing. 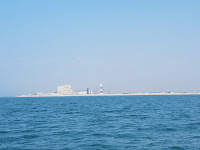 
Beachy Head on the other hand is a huge and beautiful piece of geography in its own right.  They have just one thing in common; their lighthouses are dwarfed by their surroundings. Can you spot them?

Our other milestone today was crossing the Greenwich meridian. We switched from our familiar Eastern longitude to the more exotic and adventurous Western longitude. 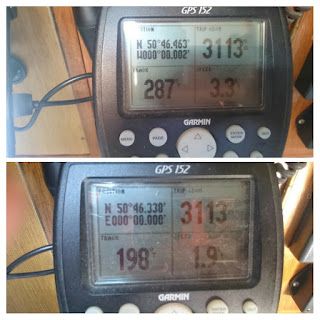 The run to Brighton is dominated by more chalk cliffs. And lots of Dutch yachts. Really really lots. More than English yachts, which is nice, cos I like the Dutch. Except they don't get queuing, well not the English way. They do queuing,  but then let their friends in front of them . Or their Dutch compatriots. Or... well, you get the picture. Luckily Teresa is both more diplomatic AND assertive than I am.  At the point I started effin' and jeffin', she steps in and says "if you you have passports and ships papers to deal with, could we go  first? We'll only be a minute." Ten minutes later, he regrets letting his mate go in front in front of him.

Anyway, queuing beefs aside, Brighton Marina is good. They are managing to fit in an endless stream of visiting yachts, the showers are spacious and there's tons of bars and restaurants to choose from, if you like restaurant chains, anway. Pity we won't get to see the city, because we're moving on to the Solent today to take shelter from some strong westerly winds that will block our progress towards Cornwall.
at July 27, 2018