Setting Off for New Cruising Grounds

We Had Enough of Palma Bay
14th August El Arenal to Portal Vels.

We intended to go back to the El Arenal anchorage to readjust after having the grandchildren with us but the waves were a little too rough and we knew the holding was a bit doubtful, so we decided to find an anchorage with better shelter. We sailed across Palma Bay to a little cove at Portal Vels. It was a very pretty but also very crowded anchorage. And with a westerly wind holding all the boats side on to the waves, very rolly too. We agreed that we’d had enough of Palma Bay and made plans to move on to new cruising grounds.

Our alarms woke us before sunrise and, for once, we didn’t roll over and convince ourselves that another half hour won’t hurt. We really had enough of Palma! Dawn saw us sailing SE into a beautiful sunrise off port bow.

We had a mix of sailing and motoring firstly round the very high light coloured cliffs of Cabo Blanco then the very low dunes of Cabo Salinas. We spent the afternoon searching a dozen coves and inlets along the Southern coastline for an anchorage only to find every one already full of boats. We eventually arrived at Porto Colom, a decent sized natural harbour. We tried to anchor in the only small patch of sand that is not covered with mooring buoys but couldn’t get the anchor to set.

Eventually we called the PortsIB harbour office and moved onto one of their mooring buoys which also gave shelter from waves and wind.

It was with relief that we relaxed with drinks in hand to watch the sun set over a safe, comfortable harbour. 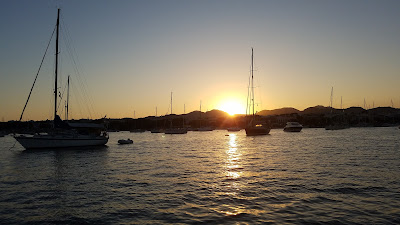