We set off from Laxe early on Wednesday morning, eager to put the trauma of the last 24 hours behind us.  The weather was overcast when we left, but no where near as bad as what we’d experienced on Tuesday.

Yet again there was only a slight wind so we had to motor to Camarinas.  Thankfully it’s a short journey of 20 miles and took us about 4 hours. Unfortunately we didn’t have the dolphin show to keep us amused, so we had breakfast and coffee instead. 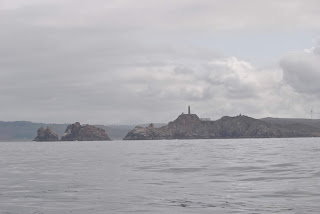 One thing that did get Mark excited was rounding Capo Vilan, which is a notorious headland on the Costa de Morte, which has claimed numerous boats and lives.  The buildings on the cape are like something out of a James Bond movie, very dark and sinister looking, which could be hosting machines and men ready to take over the world!

We arrived in Camarinas at about midday. This is Mark’s second visit to Camerinas.  It was landfall on his first Biscay crossing, when he crewed for another boat and it was here that he realised just how much he loved sailing in the open ocean and was determined to one day cross Biscay and return to Camarinas in his own boat.  So for Mark, entering Camarinas and mooring up was the realisation of a major ambition. 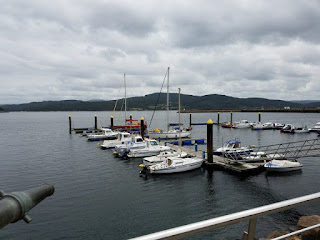 Once safely moored up, we headed up to the office to do the paperwork (you have to show passports, proof of boat ownership and insurance every time you go into a marina).  However, as we had arrived at lunchtime, it coincided with siesta time so the office was closed and they were all in the bar having tapas.  It would have been rude not to have participated in wine and tapas as well before a little afternoon snooze (we were ready for it after our 4am awakening!), so that set the tone for our stay in Camarinas!

Paperwork sorted, we showered and changed and headed off to a fish restaurant that had really good reviews on Google. Hmmm. The food was delicious, but it was bit of a culture shock when you order crab for starters and get two whole crabs plonked in front of you with claw crackers, but nothing to wipe your hands with.  Oh well, if you can’t beat them, join them – lick your fingers clean!  I then had mixed fish platter with noodles, which was absolutely delicious.  The prawns here are something else, so big and juicy (once you’ve peeled them and again no hand bowl). Mark had monkfish and boiled potatoes, which was also delicious.  I must give credit where its due, you could taste the freshness of the fish, but the service left a lot to be desired.  Never mind, there was a married  couple on the table next to us that kept us entertained for the evening

Next day we spent the morning doing mundane things like engine checks and washing, but by the afternoon we both had a strong urge to break free of Offbeat and go for a walk.  And boy, what a walk we had.

We left Camarinas with a view to go for a walk for a couple of hours. We headed out towards the hills that we had seen when we’d sailed in to Camarinas. And we just kept walking. The views were absolutely stunning and there was always a hint of more on offer. We ended up walking to the top of Monte Farelo. 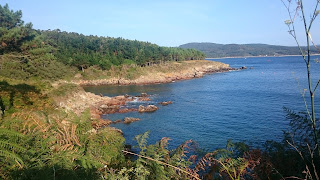 On top of Monte Farelo is the beautiful church Ermida Da Nosa Senora Do Monte. The church dates back to the 18th Century and has a very significant history with the fishing community of the Ria.  It is said that women  would climb on the roof of the chapel to change the direction of the tiles and therefore the direction of the wind so that men had good days of fishing and return safely.  The church is still revered by the community and every Easter Monday the community undertake a pilgrimage from the town of Camarinas to the Hermitage, carrying a sacred image of the Virgin Mary.  Three turns of the Hermitage are undertaken and she is asked to look after the community, particularly those that go to sea. 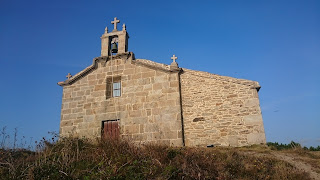 In addition to the church, the views from Monte Farelo were spectacular. To the right is the landscape as far as Capo Vilan and it’s stunning coast and beautiful beaches, to the left is Camarinas and Muxia and straight ahead is Punta da Barca. On top of that was the smell and the colours of the ocean and the heather. It truly is an amazing coastline, with something for everyone. 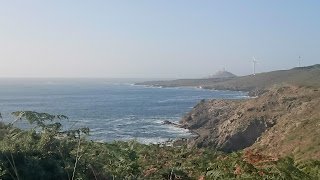 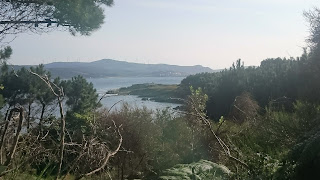 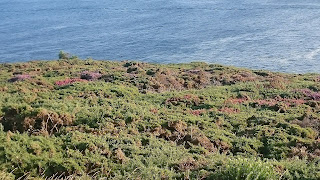 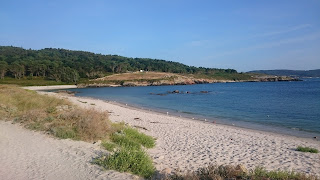 We headed back into town via a different route, that brought us out at the back of the town so that we completed a full circle of the hills. Then we found a bar and had a couple of drinks to finish our day.