On Sunday 22 July 2018 at about 1.30pm Mark and I finally set sail, leaving Ipswich on a glorious sunny afternoon.

We wanted our departure to be low key, as whilst it's a momentous step that we are taking, it's not a final goodbye forever to our family and friends. Having said that, we didn't slip away unnoticed as some of the neighbours were there to wave us off. 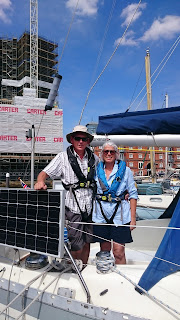 All ready for the off! 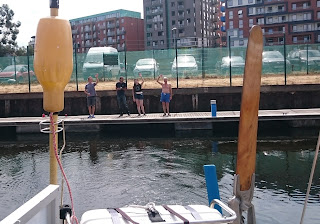 Heading out of Ipswich Haven Marina was quite emotional as we have spent a lot of time there and it has been home to Offbeat for quite a while. For me it was also very nostalgic as I grew up in Ipswich and have seen the transformation from working dock to vibrant marina.

As we were passing the quayside, the sound of traffic and chatter took me back to days gone by, when we were children cycling along the dock trying not to get the wheels stuck in the train tracks, but hurrying along so we weren't late for tea. 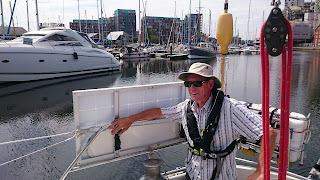 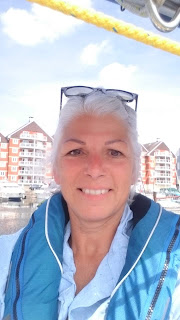 As we motored along to the lock gates, it made me realise that we were only 2 steps away from following our dream and starting our adventure .

The first was to go through Ipswich Lock Gate. No free flow for us, we wanted to do things properly! Unfortunately we hadn't taken into account that it would be a busy Sunday afternoon, so after what seemed like hours (but was only 20 minutes), we entered and tied off in the lock for one last time. Luckily, everything went smoothly and we managed to get a selfie for posterity. 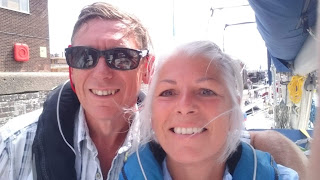 The second milestone was passing under the Orwell Bridge.  Again it was a moment of nostalgia as I remember the bridge being built - we could see it from where I lived as a child and where we played on the River banks and in the woods. It was also a point of comfort when I was working away as I knew that as soon as I saw it, I was nearly home.  However, this time it was different, I was travelling away from it, which has a much more fundamental meaning. 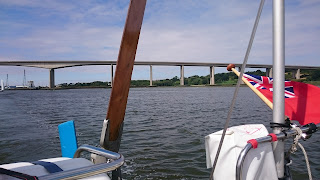 For Mark, his moment was passing the Orwell Bouy, which marks the entrance to the River Orwell. It is a river he has grown to love over the years and brought back memories of sailing adventures he's had with family and friends, through various seasons and weather conditions. 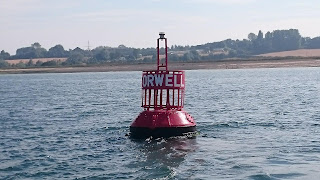 Mark often says to me 'Don't look back, you're not going there' and how true that is, especially now as this is is where our future lies.