Wednesday 30th March. We left Estepona in the early evening for an overnight sail to Motril. Only there was no wind, so we started our first sea voyage under engine.

We had chosen Motril as Offbeat needed to be taken out of the water for maintenance work and to have a survey for the insurance company.

We knew it was going to be bit of a tough sail, this being the first one of the season, an overnight sail with no moon, but the weather forecast was for strong winds to come, so we took our chance while the weather was fair.

By late evening the weather forecast had come good and there was enough wind to unfurl the twin Yankee foresails and sail at a steady pace of 4.5 to 6 knots. It felt good to be sailing and it's a really comfortable sail when the 'goose wings' are up; less heeling and rolling!

Just past midnight and Mark went off watch first. The wind had dropped so we had started to motorsail, with the engine helping to keep the speed up in order to keep ahead of the nasty weather coming up behind us. I prefer to be under motor as I have better control of the boat and wouldn't need to disturb Mark if the wind became too strong and the sails needed adjusting, so we furled the sails away.

With 100% cloud, no moon and then heavy rain setting in, I stood my watch for 2 hours. It has to be one of the worst sailing experiences I've had. I was soaked to the skin, with water dripping down my legs and into my boating shoes.

However, when Mark took over watch, the rain stopped and the dolphins came to play in the phosphorescent water, leaving sparkly green trails behind them. Some people have all the luck!

On we motored until just past 5am when the engine faded and then died. Mark checked the engine, nothing obvious and the engine restarted OK, but we unfurled the sails to get control of Offbeat.

The engine died a further three times on us during the course of an hour. With daylight approaching and Motril within our sights, Mark continued to investigate what the problem could be. Turned out it was a loose screw on a filter letting air into the fuel pipe! 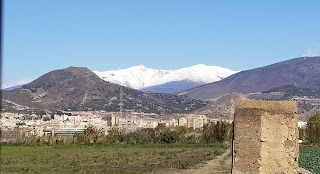 With rising winds, lumpy waves and a ship bearing down on us, we entered Motril Harbour at 09:10, having sailed/motored for 15.5 hours and covered 84  nautical miles. It was a tiring first trip but seeing the snow covered mountains of the Sierra Nevada made it worthwhile. And we beat the bad weather by six hours. By the afternoon it was gusting over 30 knots.

Just a few jobs to do!

We planned on staying in Motril for three weeks to include a trip to Granada as well. And so, a week after arriving, Offbeat was taken out of the water and the mast removed. 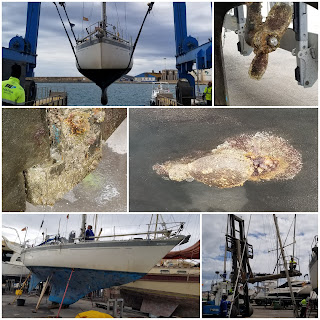 Although we had a list of jobs that needed to be done, neither of us envisaged just how long it would take us, despite working 10 hour days. As with all maintenance work, it's the unexpected jobs that arise that steals the most time. For example, deciding to have the sail drive serviced professionally but then having to wait for the parts to arrive because it's Easter and there's also a lorry strike in Spain!

This collection of photos doesn't do justice to the amount of work we did, but to list everything would be very boring, so this is just a taste.

Living on board a boat in a boat yard is tiring. Climbing up and down ladders twenty times or more a day for four weeks certainly strengths your buttock muscles and also teaches you to not forget things you need on the ground. It was made up for by meeting some lovely people - Linda, Maurice, Tony and JJ especially - and the boat yard and restaurant workers were exceptionally friendly and helpful. A real community spirit among the boaters was mixed with the welcoming nature of Andalucian people.

One of the benefits of staying in Motril is that it's only an hour away by bus to Granada. I've always wanted to go to Granada and as Easter coincided with us being in Motril, what better time. 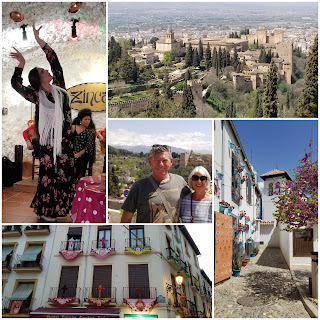 We spent three days there and saw most of the sights, with the exception of visiting the Alhambra Palace (Mark doesn't do queues.) I'm saving that treat for another visit without him! We did however walk in the beautiful hillsides surrounding the Palace and saw the sheer beauty of the Palace and its gardens from a birds eye view.  We also visited Sacramonte, once home to the cave-dwelling  gypsies of Granada whose homes now host tiny Flamenco theaters.  The Flamenco show we saw was spectacular. Not because it was a polished, well rehearsed show (which it was), but because you could tell that the musicians, singer and dancers had grown up with Flamenco in their blood and it came through in the way they lost themselves in song and dance. A privilege to watch and be a part of for a couple of hours.

We also saw a number of holy processions, starting with the most solemn ones on Good Friday, through to the celebrations on Easter Sunday. For me, the most moving one was late evening on Good Friday, the silence and seriousness during the procession is almost palpable and then it is followed by a band playing the most emotive music you can imagine for such a solemn occasion. 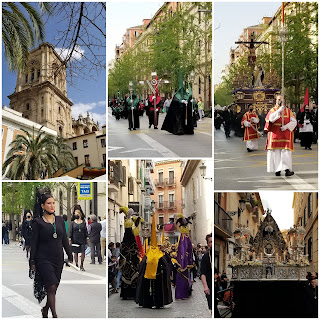 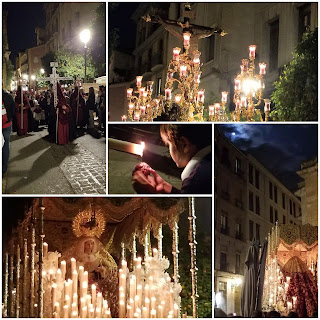 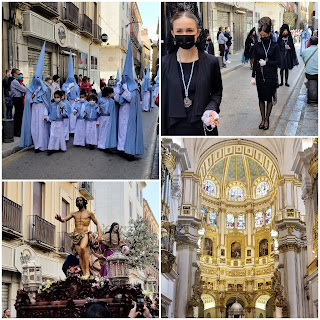 In contrast, the Sunday procession was beautiful. Led by the children of Granada, they lead with the ringing of bells and a band playing joyous, uplifting music. This was then followed by Mass in the Cathedral. A marathon Mass lasting an hour and a half. Mark waited patiently in the bar for me!
After a sumptuous lunch in a Galician restaurant, we headed back to  Motril to resume work on Offbeat.  Little did we know it would be another 4 weeks before we would get to leave!
at May 25, 2022