Diary of a live aboard during lockdown - CV Week 4

The week started on a positive high note. The marinero informed us that the postman had tried to deliver a parcel for us but as there was no one in the office they had to take it back.  It was waiting for collection from the post office in town if one of us wanted to go and get it.

That was it, the excuse I'd been waiting for to get out and have a proper walk. I would go and collect the parcel and there was no arguing! Hair, makeup and decent outfit on I was ready to go.  But, before I could leave, Mark insisted I wear a mask. That seriously cramped my style. Never mind, I was not to be put off.  Out I went into the big wide world, clutching the postal notification in my hand as if my life depended on it.

Walking along the streets, it wasn't as quiet as I thought it would be as people were busying around doing their shopping. Arriving at the post office, there were several people in front of me and it was one out, one in. I ended up waiting about 20 minutes for my turn, but I didn't care, it was a change of view and a bit of people watching.

Parcel collected (Mark's new socks!) I decided to go to the fruit and veg shop close by to pick up fresh fruit and veg that's grown locally. Again there was a queue to go in, but the wait was worth it to be able to buy carrots with their tops still on, together with freshly picked avocados and oranges. 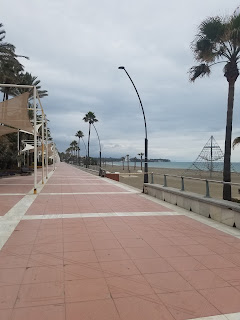 On the way back to the marina I talk a short walk on the promenade which is technically out of bounds but I was desperate to see the beach and sea.  It was really sad to see the beach cordoned off when only a few weeks ago families had been celebrating Dia de Andalucia. It was empty, except for somebody by the waters edge with a metal detector which was really random considering a) we're in lockdown and b) the beach is out of bounds. But hey, each to their own! 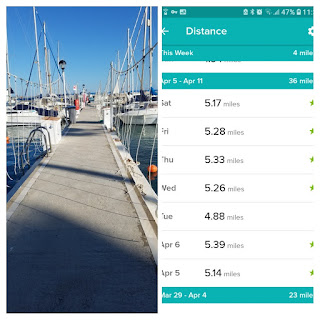 As you can imagine, trying to keep occupied and motivated during lockdown can be challenging at times so we try to vary our activity as much as possible. For me, I've set myself a goal of walking 5 miles a day, which in itself isn't hard, but can be challenging when you only have a 100 metre path to use. 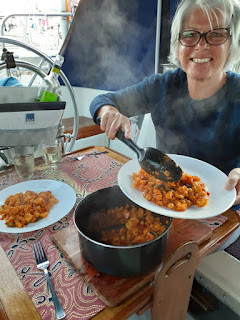 Mark is continuing with his fishing and has progressed to the end of the pontoon in the hope that he'll have more luck catching them as they swim past. He really hoped that he could catch some fish for Good Friday as it's the one day of the year I refuse to eat meat day (the Catholics amongst us will get it) but unfortunately he didn't catch anything so it was off pre-bought prawns and octopus cooked up in homemade paella! 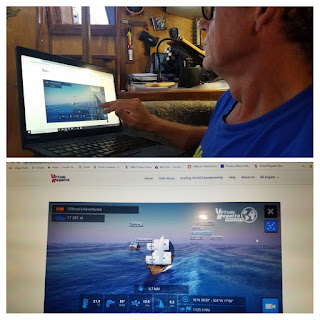 As well as fishing, he's busy on a new race on the virtual regatta. This time they are sailing from Cape Verde to Cadiz, racing 16th century 'Caravels'. It's a 2,000 mile race and by Saturday he'd covered about 1,000 miles. As it's done in real-time, it's made him realise what a long slog ocean racing is. 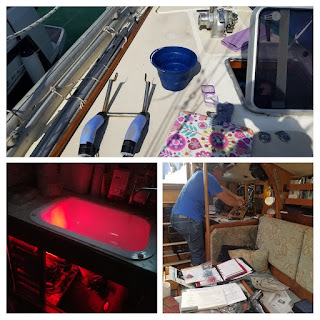 In between rain showers (don't ask, the weather is awful at times) we've managed to fit in a few jobs that were on the endless 'to do' list. Of particular note is the fridge fan, fitted next to the fridge compressor so that it keeps it cool.  It has the added bonus of having a light fitting as well, so we can have a funky illuminated sink if we want! He has also been busy adding a wifi AIS set, fixing a bad connection on the vhf radio arial and an exhaust temperature alarm so that we get a warning if the engine is overheating. For my bit, I've been polishing the stainless steel, removing rust spots and generally revitalising it all.

As we entered the fourth week of lockdown, the extension to the State of Alarm was approved by the Spanish Government, so there will be no movement until at least 25 April.  Although Spain appears to have reached the peak of infections and deaths,  there is talk of a further extension until 10 May albeit some sectors may return to work earlier.  As of Saturday, the total number of Coronavirus infections stands at 163,027 and the number of deaths due to Coronavirus is 16,606. Social distancing in Spain is still a critical part of trying to get control of the virus and to this end, the police are taking a firmer approach to people who are recklessly breaking quarantine, with reports of hefty fines and for persistent offenders, a short jail term. 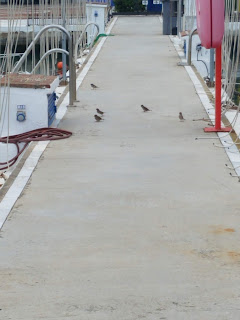 It's not all doom and gloom though, there have been some positive highlights to the week.  With the closure or restaurants and bars around the marina, we have noticed Sparrows searching for food so we've sort of adopted them and make sure that they have a daily supply of fresh. In return, they chirrup us in the morning which gladdens your heart in these uncertain times.
at April 17, 2020