Early August - a Week of Highs and Lows 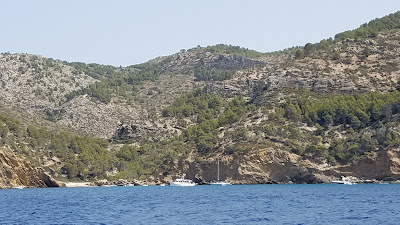 30th July Soller to Cala Egos
We had a lovely 3½ hour sail downwind from Soller, on 1st reef and averaging 5kn. After passing Isla Dragonera, looking even more dragon-like than our first passing it, we found the beautiful Cala Egos. This small cliff-ringed cove was fairly crowded but we got a nice slot 200m off the tiny beach. And as the sun went behind a tall cliff we got some much appreciated shade from what has been relentless sun for many days.

Teresa was spoiled in her hobby of superyacht spotting by the arrival of Rising Sun - the biggest one we had shared an anchorage with. She informed me that its only guests were Katie Perry and Orlando Bloom. It looked the size of a decent hotel, so I guessed they must have a big entourage.


The usual evening exodus meant it was very quiet and peaceful in the morning.Teresa was beside herself when she spotted the two celebrities (I hate myself for even using that word) sunbathing on the beach before the crowds arrived. We enjoyed ourselves swimming and went for a walk through the beautiful woods behind the beach.

Back to the Rat Race
1st August Cala Egos - Las Illetas (Portals Nous).
We left Cala Egos reluctantly, vowing to return, and had a nice 3 hour sail into Palma Bay before motoring to our chosen anchorage. Palma Bay is a lot more built up than we had got used to and busy with far more boats.The anchorage at Portals Nous was crowded, with boats jockeying for a place, the waves quite lumpy, and the shoreline unattractive. It was a culture shock after the charms of Cala Egos and underwhelmed us so much that we didn't bother to take photos.

The Worst Day of Our Summer
2nd August Las Illetas to Cala Mayor
Cala Major is the nearest anchorage to Palma and has shops and buses just off the beach, plus Joan Miro’s house on the hill, which I was especially keen to visit. We went ashore in the dinghy, struggling to find a place to land and on the densely packed beach. It was impossible to do our usual trick of pulling it up the beach and finding somewhere to chain it to so I tied it to a buoy marking the dinghy and paddleboard fairway though the swimming zone. Big mistake.

We went to buy groceries and have a little tapas lunch. When we returned the dinghy had been swamped by the waves that were kicked up by the very strong sea breeze that was now blowing. ‘Oh, that’s why they have so many lifeguards on this beach’ I thought as one strode towards me, scolding my stupidity but helping me bail the dinghy out and set every thing right. After a hard row through the waves we made it to Offbeat. Just as my adrenaline was subsiding, Teresa said ‘I think we are closer to those rocks than when we left. Mark, I think there’s a problem! We really are a lot closer to the rocks.’ I checked the GPS which had logged that our anchor had dragged 30m. My heart jumped into my mouth. Time to get the engine on and the anchor up. But as soon as I put any revs on the engine it faded and died. I checked the fuel, changed over the fuel filters, looked for air leaks into the fuel system, removed the air filter, everything that I knew could cause that sort of problem. Nothing fixed it and the anchor was still dragging as the waves and wind increased. I spotted a speed boat heading our way and flagged it down. I explained my problem to the Scandinavian guy in the speedboat and asked if he’d tow us 50m further out to sea. ‘’Sure’’ he replied ‘’but first I have to drop off my daughter on the beach where her mother is waiting. We are late and she will give me a hard time for this.’’ So saying, he took his speedboat about 20m towards the beach and told his daughter to jump in and swim to the beach. She did. ‘’Bloody hell’’ I thought. “Being late might be the least thing she’s going to give you hell for”. He towed us out into deeper water and better holding and even tried to refuse the bottle of wine I insisted on him taking to say thank you to him. Then Teresa bravely swam out over to the anchor to see if had buried properly in the sand, insisting that I was needed on the boat in case something went wrong. Later she pointed out that she noticed I offered him her last bottle of wine, not my last can of beer. “Oh, I didn’t realise, sorry love” I lied. Probably not my finest hour.

The next day was taken up with a five hour long engine repair session.After stripping the rest of the fuel system twice, I found that it was two separate and very different faults in the fuel filters, which was a) pretty improbable and b) fooled me completely for four hours, as the filters can be switched over one to the other, so if the fault persists when switching them, it can’t be the filters, right? So, after cleaning out some very fine red dust from one of them (how did it get in there, the fuel looked clean) and replacing the cracked glass bowl in the other I got the engine working properly. I rewarded my efforts with the last can of beer (see, there was a good reason that I kept it back) and had a long siesta.


Escape From Cala Mayor
4th August Cala Mayor to El Arenal
The swell started building early in the morning and we now know how much more it builds by the afternoon. Foregoing our usual leisurely breakfast, we raised anchor and left the cursed Cala Mayor. We peered into Palma harbour as we passed - the city looks impressive as do the liners and superyachts lined up on the quaysides. There was a huge exodus of boats heading west and south. It was the start of the charter week. The engine took us reliably across the bay with me straining to hear any change in rhythm, any missed beat. No, it was back to its old self. We anchored just outside the harbour wall at El Arenal in a small cala Es Fornas. We had a bit of trouble getting the anchor to set. Just enough trouble to guarantee me another night’s bad sleep, as I vowed that tomorrow I’d sleep tied up safely and securely in a marina.