Chilling on the South Coast!

It felt good arriving in Mallorca on Sunday morning and luckily, when we called the marina for a bouy for the evening they had one available.  Aside from being very tired, we had an even more important reason for going into the marina, access to a good signal.  There was an important football match to watch later in the evening.

After a quick nap, chores done and refreshing showers, we settled down to watch England in the Euro 2020 finals over dinner.  During the day we had heard the build up to the game coming from the bars, with a lot of singing from English fans so despite it being just the two of us on the boat, we felt part of a wider crowd. Listening to the crowd, we knew when England had scored as we heard the cheering. For some reason our viewing was a few seconds behind. Going into penalties was nail biting, hearing the roars from the crowd we waited in anticipation and when they all roar went up,  we assumed England had won. But no, it was the Italian fans who up until then had been rather restrained. Proud but disappointed we listened to the Italians celebrating. At least we had a beautiful view of Andratx Bay to console ourselves with.

Next day we headed off for our next destination, Palma.  We had booked into a marina that was very close to the Cathedral for a couple of nights. It apparently had the best views in town. The weather when we left Andratx was overcast and grey, with light winds.  We headed further out to sea to get out of the wind shadow of the mountains and raised all three sails. 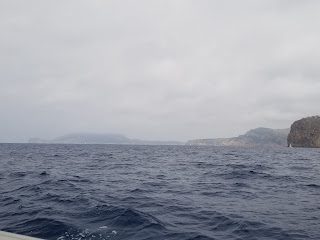 Once further out, we resumed our course to Palma but despite best efforts from Mark adjusting the sails, our speed fell to 2 knots so it was engine on.  The weather was or a couple of nights grey and 'murky' with poor visibility on land. 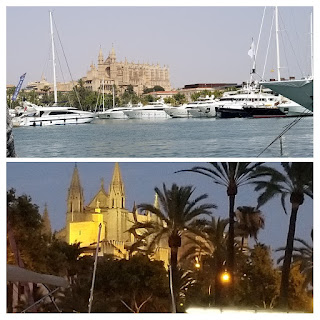 By the time we approached Palma marina the wind had started to increase but not enough to sail without the engine.  At least the weather had improved and we were able to see Palma Cathedral in all her glory.  Tying up in La Lonja marina in Palma, we realised how lucky we were to find this little gem.  Best views of the Cathedral, 10 minute walk to the centre of the city, good facilities and service and the cheapest marina in Palma. With happy hearts, we hit the town!
Whilst in the marina, we took a day off sailing to go exploring inland. I visited the Cathedral and went to Mass and then Mark and I visited the Miro Foundation and Belvedere Castle. Our day out is covered under a separate blog. 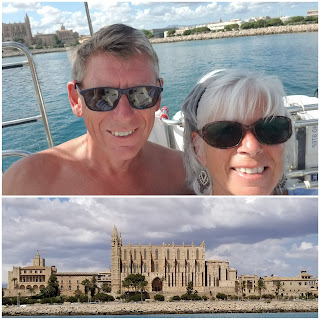 Come Wednesday it was time to move on.  As the weather was calm for a few days, our plan was to spend a night at anchor in the bay of Palma and then head further along the south coast.  Mark had checked out the anchorage in Palma bay the previous day and it appeared to be okay, so we dropped the lines and motored the mile or so to the bay.  Being mindful of the flying zone for the firefighting seaplanes, we dropped anchor and had lunch whilst admiring the most amazing view of  Palma Cathedral. 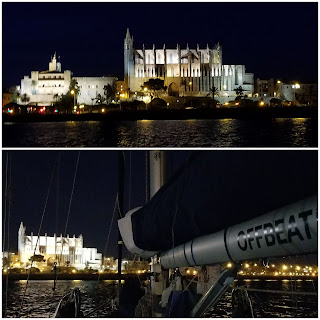 We didn't realise it would get better until night fell and we saw the Cathedral litup in its full glory. I can honestly say it was a spectacular sight and one I don't think I'll ever forget.
As a teenager I visited Palma a number of times, but never in my wildest dreams did I imagine that one day I would be sitting on a yacht in the bay admiring the Cathedral whilst on the adventure of a lifetime. Quite a moment!
At 10.30 am on Thursday morning we raised the anchor and with backward glances to Palma, set our course south towards San Jordi. We had light winds and smooth calm seas. 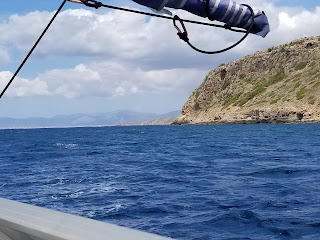 By midday, our slight southwesterly wind had turned into a swift breeze from the south, nearer our direct course, slowing us down by half a knot.  It was also slightly uncomfortable as the waves were increasing so Mark reset our course so that we headed further inshore as we were in an acceleration zone with the wind coming off the cliffs. This gained us back the extra half knot that we had lost with the wind. 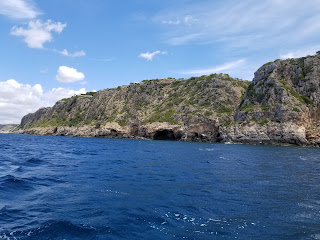 It also meant that we could really appreciate the spectacular cliffs. With ravines and crevices high on the cliff tops and caves carved out at sea level you had to wonder at the marvel of nature.
We continued close in shore for most of the way to San Jordi as at times, the wind and the waves were nearly stopping us in the water.
By 16:00 we reached our destination and anchored 100 metres south of Illa Gavina, a few metres away from the spot where we dropped our anchor two years ago.  Who says we're creatures of habit! 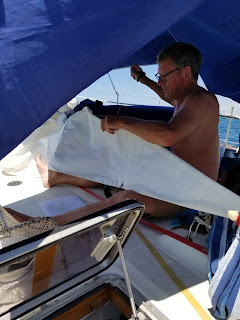 We decided to stay in the anchorage for a couple of nights, enjoying a rest and the occasional swim.  Mark took the opportunity to repair the staysail.  It had chafed on something and a tiny rip had appeared so he repaired the rip and added further protection from chafing. The afternoon heat was intense. Thank goodness for the foredeck cover!
The weather was being kind and there was a good forecast for the following week to go and explore the east and north coast. Previously we had only got as far as Porto Colom, halfway up the coast. This year we wanted to circumnavigate the whole of the island.  We used our time in the anchorage to research and plan our journey for the next couple of weeks.  There were places that I really wanted to visit and places that Mark wanted to check out and visit too.
By Friday evening, we had a plan in place. Marina booked, pilotage plan written and calas sketched. With good weather forecast for the coming week, we were good to go and start cruising the east coast.
at July 28, 2021